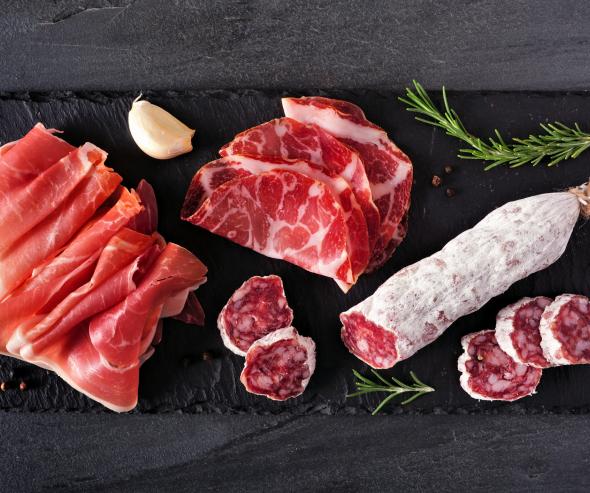 The manufactures involved (“cold meat manufacturers”) worked in concert in order to purchase cuts of ham from slaughterhouses at lower prices and/or were fixing the price increases for the cold meat products they intended to charge mass-market retailers for their branded products or “economy products”.

The Autorité de la concurrence today issues a decision in which it fines a cartel involving 12 companies operating in the ham and cold meats sector.

- Cold meat manufacturers were coordinating with each other with a view to showing a united front at their negotiations with slaughterhouses in order to counter any requests to increase the price of the raw material or even obtain price reductions for its purchase (the “ham, flank removed”)1.

- The manufacturers were also coordinating with each other with a view to developing a common position on price increases for cold meat products that they intended to charge mass-market retailers for their retailers’ brand or “economy products”1.

A large-scale case brought to light by the leniency procedure

These practices were brought to light thanks to the leniency procedure, which allows companies that have been involved in a concerted practice to disclose its existence to the Autorité and benefit, under certain conditions, from full or partial exemption from a fine. In this case, two groups, Campofrio and Coop, applied for leniency and supplied information for the investigation.

For the purposes of the case, the Investigation Services examined thousands of pieces of evidence: those provided by the leniency applicants as well as those seized during unannounced inspections conducted by the Autorité (handwritten notes, emails, telephone call histories, summary documents, etc.). Several interviews were also conducted to supplement this evidence.

The anticompetitive agreement practices adopted by the cold meat manufacturers related both to the upstream market, i.e., relations between the manufacturers and the slaughterhouses that supplied the raw material, and to the “downstream’ market, i.e., their relations with their clients in the mass retail distribution sector

A "ham, flank removed" (known as “jambon de mouille” in French) is a cut of pork and is purchased by cold meat manufacturers to produce cooked hams after processing.

Between 2011 and 2013, four of the biggest groups in the sector, i.e., the groups Campofrio ( which markets brands such as Aoste and Jean Caby) Fleury Michon, Financière Turenne Lafayette (which owned the brands Paul Prédualt, Madrange, etc.) and Les Mousquetaires2 ( which sells its own brand Monique Ranou), coordinated on the weekly price variation of “ham, flank removed” with a view to showing a united front in their dealings with slaughterhouses in order to be able to better resist requested price increases or obtain price reductions.

The result of the negotiations with the slaughterhouses is reflected in the change in the weekly price index for a "ham, flank removed" published by the Rungis market, which serves as a benchmark for purchases of "ham, flank removed" by the other cold meat manufacturers and for the negotiation of contracts for branded products between cured meat manufacturers and supermarkets and hypermarkets.

The cold meat manufacturers concerted over the prices of cold meat products, including raw/dry products (sausages and dry sausages, salami, raw ham, chorizo, pavés, rosette, etc.) and cooked products (cooked hams, pâtés, rillettes, black pudding, ”Andouille”), that they intended to propose to mass-market retailers for their branded products or economy products, particularly within the framework of the tenders organised by these retailers.

In regard of raw/dry cold meat products, these exchanges took place in the form of multiple bilateral telephone calls and at at least 6 secret multilateral meetings between competitors at hotels in Paris and Lyon (Ibis Gare de Lyon and Ibis Lyon Est Bron) during which a “roundtable” was held, retailer by retailer, to express the positioning of each competitor, the current or desired price increases and the results obtained in negotiations with the distributors. In relation to cooked meat products, these exchanges only took the form of bilateral telephone calls.

By holding secret talks on the positions to adopt prior to negotiations, the cold meat manufacturers imposed a mode of organisation that replaced effective competition and which relieved the interested parties of any uncertainty about the conduct of their competitors. These practices are serious: they distorted the business relations between the cold meat manufacturers and slaughterhouses, on the one hand, and mass-market retailers on the other.

When determining the level of the fines, the Autorité took into account the strong negotiating power of the mass-market retailers - which limited to a certain extent the impact of the practices on consumer prices - the difficult economic situation in the cold meat sector and the individual financial difficulties experienced by some companies.

It also took account of the leniency applications when determining the level of the fines for the companies that had chosen to cooperate with the Autorité, but did not grant full exemption from fines to the first-in applicant. For example, it noted that Campofrio Group had failed to cooperate by failing to declare it that a meeting on raw cold meat products had been organized, which one of its employees had attended. However, it did grant the second applicant Coop Group the “leniency plus" 3 procedure, which entails granting an additional exemption to a second applicant if that applicant provides unquestionable evidence enabling the Autorité to establish complementary elements of fact which have a direct impact on the determination of the amount of the financial penalty.

As a very large number of companies were involved in these practices, the table below provides a summary of the aggregated fines by company. To find out the individual fine for each company, please refer to the full text of the decision.

1To discover the identity of the participants in each practice, please refer to the details presented later in this press release or consult the full text of the decision.

2Les Mousquetaires Group is a distribution group (Intermarché, Netto, Bricomarché) that also manufactures its own brands.

3Paragraph 19 of the procedural notice on the French leniency programme issued on 2 March 2009.

Prior fines imposed on cartels in the food products sector