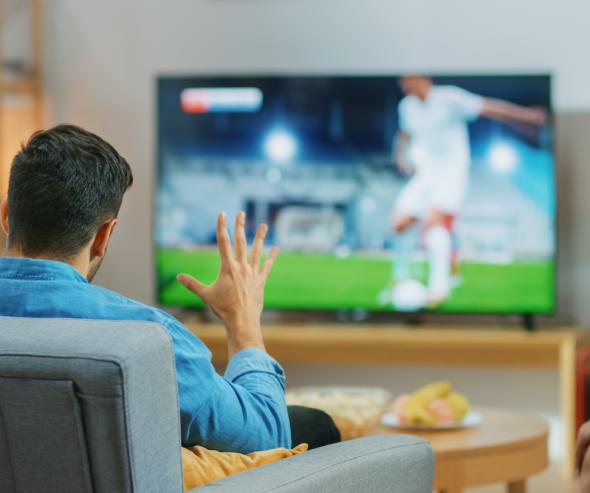 The call for tenders launched in 2018 by the LFP

Broadcasting rights for the Football Ligue 1 are allocated by the LFP, which centralises their marketing on behalf of professional football clubs. Since 2008, these rights have been granted for four-year cycles, following calls for tenders.

[1] The Ligue 2 rights were also included. 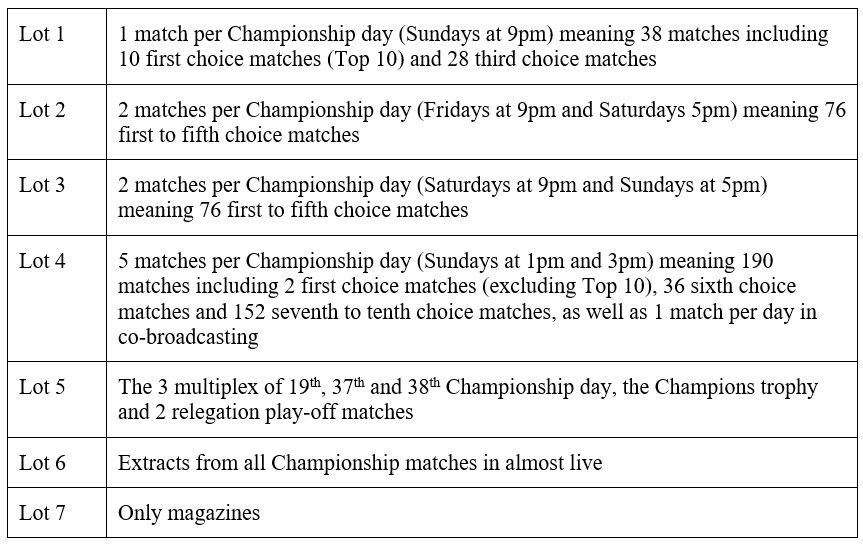 At the end of the call for tenders, the rights were allocated to the following operators:

To exploit the rights it had been awarded, Mediapro launched the Telefoot channel on 17 August  2020. However it quickly encountered difficulties in honouring the rights payment deadlines to the LFP. After several months of negotiations, Mediapro and the LFP finally agreed on an early termination of the contract between them. This agreement was approved by the Nanterre Commercial Court on 22 December 2020.

Following the restitution of the rights by Mediapro, the LFP organised in January 2021 a market consultation for the reawarding only of the rights previously awarded to Mediapro  The consultation, launched on 19 January 2021, was declared unsuccessful as the LFP received offers (from Amazon, Discovery and DAZN) below the reserve prices.

At the same time as proceedings before the commercial court[1], GCP lodged a complaint before the Autorité reproaching the LFP of having put back on the market only the rights returned by Mediapro, without including lot 3. In doing so, the LFP would have, on the one hand, imposed unfair trading conditions on GCP and, on the other hand, discriminated against GCP in relation to other buyers of Ligue 1 rights.

GCP also requested the issuing of interim measures with a view to ordering the LFP to organise a new call for tenders, this time covering all the Ligue 1 rights (including lot 3) and suspend the execution of any contract resulting from the market consultation launched by the LFP.

The agreement between GCP and the LFP

In parallel with the proceedings initiated before the commercial court and the Autorité, GCP and the LFP concluded a comprehensive agreement, made public on 4 February 2021, concerning the Ligue 1 and Ligue 2 broadcasting rights for the end of the 2020-2021 season.

The Autorité considered that the LFP's choice not to include lot 3 in the market consultation was both necessary and proportionate. On the one hand, indeed, it cannot be envisaged to require the LFP to terminate the contract concluded with beIN Sports on lot 3, this contract being duly formed, having never been contested in court and being perfectly executed. On the other hand, such a requirement would be all the less justified as the LFP's objective was to best protect its interests and those of the clubs following the failure of Mediapro, for which it cannot be held responsible. In a context further marked by the health crisis, which has degraded the income prospects of football clubs, the LFP had no interest, quite the contrary, in terminating the contract for lot 3.

The Autorité noted that the terms of submission to the LFP market consultation appeared, as the case stood, both in line with the recommendations of the competition authorities, and identical for all potential candidates. Furthermore, the fact that GCP bears alone, given the sub-license agreement freely signed with beIN Sports, the financial burden associated with lot 3, is irrelevant for the analysis of a situation of discrimination. Indeed, the other potential candidates could also have already acquired rights relating to Ligue 1 or other sporting competitions and could themselves also be confronted, particularly with regard to new entrants, with the need to organise in a constrained time the distribution of their commercial offers and a schedule of programs. On the contrary, GCP could benefit from its presence in the market for the distribution of pay television services and its long-standing experience in the market for the acquisition of Ligue 1 rights.

The 2021 market consultation therefore does not appear to be discriminatory, since it treated all candidates in an equivalent situation in the same way.

In view of all of those elements, the Autorité rejected the complaint on the merits of the case from GCP and, consequently, the associated request for interim measures.

[1] GCP sued the LFP before the Paris Commercial Court, in order to obtain the cancellation of the consultation, on the grounds that it did not include lot 3, and asking it to order the LFP to organise a call for tenders for all Ligue 1 broadcasting rights for the seasons 2021-2022 to 2023-2024 (including lot 3). On 11 March 2021, the commercial court dismissed its request.