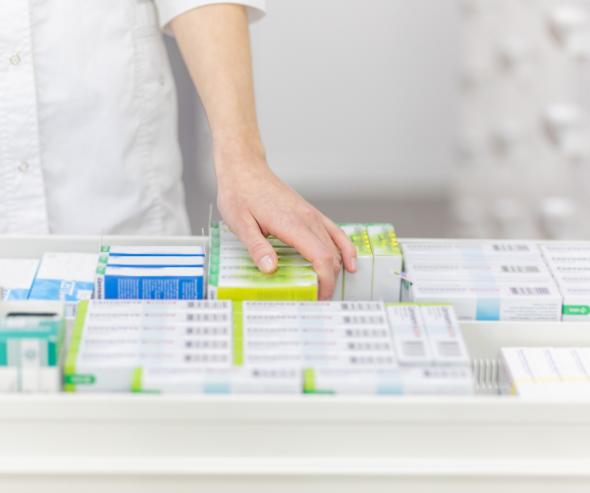 Following a complaint from the Teva Santé company (ranked 3rd manufacturer of generic medicine in France), the Autorité de la concurrence today issued a decision, whereby it fines Sanofi-Aventis a total of €40.6 million for implementing a denigration strategy. This strategy was aimed for healthcare professionals (doctors and dispensary pharmacists) and against generic versions of Plavix®, with a goal to limit their entry in the market and favour Sanofi-Aventis’ own products, the originator Plavix® medicine and its generic version marketed by Sanofi-Aventis, Clopidogrel Winthrop®.

Plavix® is a medicine used to prevent relapses of serious cardiovascular diseases. It stands as a “blockbuster” in the pharmaceutical industry: as the world’s 4th best-seller, it represented, in 2008, the higher amount of a medicine reimbursement by the Assurance Maladie – French public health care system –, that is, €625 million).

In 2010, the Autorité de la concurrence issued a first decision on this case, whereby it had dismissed a request for interim measures and decided to proceed with the investigation on the merits of the case (see press release and decision 10-D-16 of 17 May 2010).


Plavix® and its patents

Sanofi-Aventis, a subsidiary of the Sanofi group and French leader of the pharmaceutical industry, began to market Plavix® in France in February 1999.

Plavix® medicine’s active ingredient is clopidogrel. It was granted a marketing authorisation (“autorisation de mise sur le marché”, hereinafter “MA”) on 15 July 1998 and falls under the antiplatelet medicine category. It is mainly prescribed by general practitioners and cardiologists in private practice, in the framework of ambulatory care. The Plavix® medicine is used to prevent complications from atherothrombosis, a disease resulting in arterial stiffness and which may lead to lesions on artery walls and cases of thrombosis (blood clots).

Even though the patent protecting this medicine in Europe expired in July 2008, Sanofi-Aventis filed complementary patents in order to extend this initial protection:

The variations in salts and therapeutic indications of Plavix®’s generic competitors, only due to intellectual property issues rather than to specific chemical or medical characteristics, have no impact on the bioequivalence and substitutability of these medicines; this goes for all pathologies treated by Plavix®, including ACS. Indeed, as soon as a specialty generic is listed in the generics’ directory, no legal or regulatory provision may prevent its prescription in substitution to the reference specialty, even if the specialty generic did not provide all the therapeutic indications of the latter.

In this context, the Afssaps1 pointed out to the Autorité’s services that “the applications for MA of clopidogrel in a form other than hydrogen sulphate (the salt in PLAVIX) presented, in addition to a study on bioequivalence to the PLAVIX specialty, data demonstrating the safety and efficiency of the different salt (clopidogrel besilate or clopidogrel hydrochloride). It stems from the above, that the variation in salt does not forbid a specialty being classified as generic, and, therefore, it does not constitute an obstacle to substitutability”.

The first clopidogrel generic competitors of Sanofi-Aventis were marketed at the beginning of October 2009.


The practice implemented by Sanofi-Aventis

Sanofi-Aventis implemented a global and structured communication strategy, with an aim to influence doctors and pharmacists in order to stop the generic substitution process at two key stages:

This communication was implemented from September 2009 to January 2010, at the exact time when specialty generic competitors were introduced in the market.

It results from many testimonies from doctors and pharmacists, as well as from feedback from the Caisse nationale d’Assurance maladie des travailleurs salariés (CNAMTS, French public health care system) and information provided by the retail pharmacist associations Giropharm and Réseau Santé, that medical visitors and pharmaceutical representatives from Sanofi-Aventis spread, at national level and to doctors and pharmacists, views shedding doubt on the efficiency and innocuousness of generic competitors of Plavix®. They also implied that these professionals could be held liable if medical problems should arise following the prescription and/or sale of these substitution medicines.

Substantial feedback provided by the CNAMTS establishes that doctors were greatly influenced by this discourse. Here are a few examples:

In the Champagne-Ardenne area: “antigeneric communication from MV [medical visitor] to pharmacies with an aim to prevent the substitution of Plavix®, unless the generic medicine should be Wintrop. A communication that was sometimes aggressive : such substitution (except in the case of the Wintrop generic medicine marketed by the same brand) would be a « murderous » behaviour. Main argument : the salt difference. Communication of the MV to doctors in order to encourage “NS” [non-substitution]. Death cases linked to Plavix® substitution were mentioned by the MV […] ” (paragraph 183 of the decision)

In the Nord-Pas-de-Calais area, the speeches identified mentioned in particular an “endangerment of patients if plavix or its generic from the same brand is not prescribed”, and a “defamation of other generic medicines by insisting on the pharmacist’s liability in a case a patient suffered complications following the substitution” (paragraph 186 of the decision).

In the Rhône-Alpes area, “pharmacies notice numerous “NS” indications on the medical prescriptions for clopidogrel (50% of medical prescriptions, because labs “terrorised” doctors with their speeches) and voice their discontent: ‘we must fight the disinformation spread by the labs every time a generic products enters the market’” (paragraph 247 of the decision).

In the Centre area, cardiologists “systematically add on to their prescription the indication “non substitutable”.

In the Midi-Pyrénées area, “both general practitioners and pharmacists do not wish to take any risks by prescribing or selling the generic product because there are doubts regarding the therapeutic efficiency of the generic products marketed (doubts on efficiency, concerns over medical consequences). Doctors therefore add the indication “non substitutable” on the prescriptions and chemists do not substitute or they reference the generic produced by Sanofi-Aventis, Winthrop”. (paragraph 500 of the decision)

In the Picardie area, “general practitioners and cardiologists do not wish to take any risks; consequently, more and more do the indications “PLAVIX NS”, even sometime “CLOPIDOGREL WINTHROP NS”, appear on prescriptions.” (paragraph 501 of the decision)

Likewise, numerous pharmacists reported that they chose to order the generic medicine marketed by Sanofi-Aventis, Clopidogrel Winthrop®, to avoid being held liable. Among the many examples identified, here is a testimony of a retail pharmacist located in Pierrelatte:

“We sell the generic medicine of the Winthrop labs because it is made with the same salt as Plavix and we do not want to be held liable if we associated with the Kardegic. On this subject, the pharmacy’s employees were very convinced by the SANOFI labs’ discourse on the concept of liability upon delivery, in resulting cases of strokes and heart attacks (there are risks involved when mixing kardegic and a generic medicine other than winthrop)” (paragraph 494 of the decision).

Finally, the pharmacists’ associations Giropharm and Réseau Santé had to distribute circulars to their members, so as to counter the “misinformation campaign” ran by Sanofi-Aventis and to restore scientific facts. Here are some extracts:

“The salt used in the medicine is not critical element of its efficiency”; “The absence of a specific therapeutic indication (i.e. certain combinations with salicyclic acid) is not due to a possible lack of efficiency of generics, but to the fact that they were patented at a later date than the other therapeutic indications”. (paragraph 195 of the decision)

“Sanofi tried to do with the “salts” what it had done with the “Excipients known to have a recognised action”. Let’s be objective: we understand Sanofi’s motives (see above) when opposing generic medicines for its flagship product. However, today, Afssaps did not hold the difference in salts to be a valid argument to prohibit Plavix’s generic medicines, and it referenced the molecule in the generics directory. The influence of the salts is becoming a non-argument, which chemists cannot be fooled by: no serious publication can justify Winthrop’s position”. (paragraph 197 of the decision)


A serious practice, which substantially curbed the substitution process of Plavix® by generics

Sanofi-Aventis’ discourse created uncertainty about the quality and safety of generic medicines, without any evidence for basis since nothing shows that Plavix®’s competing generics are less safe that the originator. In this regard, the Autorité stresses that Sanofi-Aventis filed no appeal against the MAs that were granted by Afssaps. Furthermore, Sanofi-Aventis was free to submit to the healthcare authorities any information it had relating to the safety and efficiency of the Plavix® generics, not only within the framework of MA procedures, but also within that of pharmacovigilance. But it did not bring to the attention of the healthcare authorities, after conclusion of the scientific debate before them, any argument that would allow for uncertainty about the quality and innocuousness of the Plavix® generics.

This misleading discourse gave rise to real concerns among healthcare professionals; all the more widely echoed that:

Case documents show that the substitution rate for Plavix® follows a very atypical pattern. Indeed, despite great volumes and turnover, as well as numerous generic labs operating in the market, this rate, after it soared when generic were introduced, then experienced a steady decline for numerous months; no other similar molecule experienced such a pattern, as shown in the graph below: 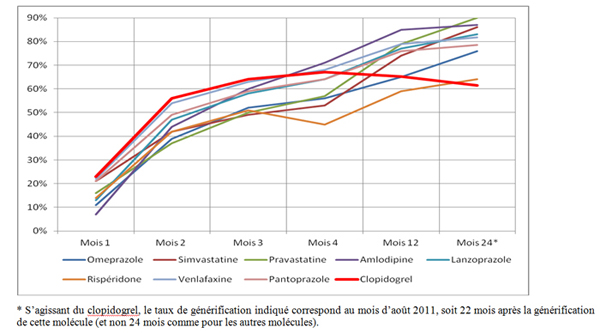 * Concerning Clopidogrel, the substitution rate indicated corresponds to the month of August 2011, that is, 22 months after the generic introduction of this molecule (and not 24 months, as applied to the other molecules)

As the price of a generic medicine is significantly lower that the price of the reference originator (the discount is usually set at 55% of the manufacturer’s price, excluding VAT), savings of more that €200 million were expected in the 2010 results by the Ministry of Healthcare, thanks to the launch of Plavix® generics; it was expected that these generics should account for 75% of all sales by end 2010. However, in its report on the results for 2010, the Sécurité sociale (Public health care system) notes that “the effective penetration rate of the clopidogrel at end-December 2010 [was] lower by 10 points than the targeted rate (64.6% vs. 75%)”. If the Sécurité sociale’s aim does not constitute a precise and indisputable reference for what should have prevailed in the absence of anticompetitive practice, it provides nonetheless an order of magnitude which confirms that the rate of introduction of Plavix® generics was significantly lower that it should have been.

Plavix® representing the higher amount of a medicine reimbursement by the Assurance Maladie, the amount of forgone revenue is therefore substantial for public accounts.

An atypical market share for the generic medicine marketed by Sanofi-Aventis, at the expense of other generic labs

The practice at stake also resulted in an exceptional penetration rate for Sanofi-Aventis’ own generic medicine, Clopidogrel Winthrop® (now called Clopidogrel Zentiva®). This product enjoys a market share of over 34% in the clopidogrel generics segment; in other words its market share is four times greater than the one usually held by Sanofi-Aventis in the French generic medicine market.

A practice constituting an abuse of a dominant position

On the basis of all these elements, the Autorité de la concurrence found that Sanofi-Aventis abused its dominant position in the French market of clopidogrel prescribed by ambulatory care, and therefore breached Article L.420-2 of the Commercial Code, as well as Article 102 of the Treaty on the Functioning of the European Union. The practices identified are particularly serious and justify the €40.6 million fine imposed on this company.