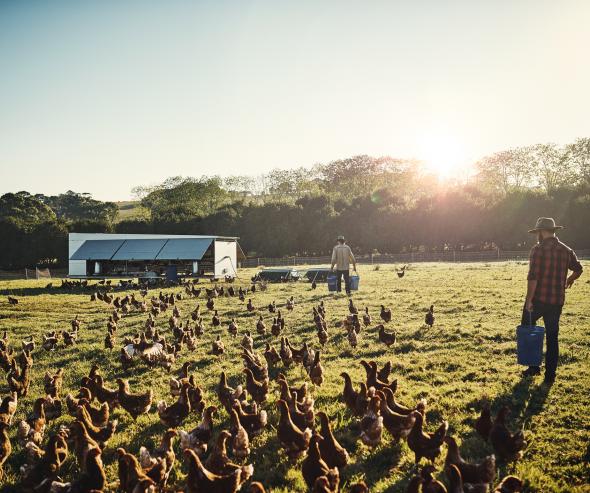 Given the collective commitment made by almost all the manufacturers in the sector
to establish an inter-branch organisation, the Autorité de la concurrence has decided, for reasons of general interest,
to depart from its usual method for establishing fines and impose far more moderate fines on these companies.

Consequently the Autorité has imposed fines of 15.2 million euros on 21 poultry manufacturers
and two of the sector’s professional bodies for concerted practices between 2000 and 2007
aimed at reducing uncertainty in their trade negotiations.

The Autorité de la concurrence received a referral in April 2011 on the basis of an investigation report from the DGCCRF (Ministry of the Economy), following dawn raids carried out in December 2007. The Autorité is today publishing a decision whereby it finds two professional organisations and manufacturers representing almost the whole of the poultry market (chicken, turkey, duck, guinea fowl, rabbit), in all its forms – whole birds ready for cooking, cuts or preparations – guilty of anti-competitive practices.

Given the very specific circumstances of this case, the Autorité held that the collective commitment to establish a inter-branch organisation within a constrained timeframe, made by manufacturers representing the bulk of the market, is likely to be more effective, in terms of the sustained compliance with competition rules in the poultry meat sector, than fines calculated according to the usual method.

Operation of the market

Manufacturers slaughter and sell poultry in the form of fresh or frozen meat, as well as poultry processed products, to clients consisting of supermarkets and hypermarkets, wholesalers and the catering industry.

Relations between farmers and producers operate for the most part on the basis of an "integrated" system, in which slaughterhouses provide farmers with the chicks and their food, and pay them, as though they were sub-contractors. Unlike other slaughterhouse sectors, the poultry sector is differentiated in that the risk linked to volatility of cereal prices lies entirely with the producer. Cereal prices represent two thirds of the price of a standard bird. The risk-taking on input cost is coupled with the risk-taking related to volumes. Indeed, provision of chicks for rearing basically forms part of a purchase-guarantee framework for poultry ready for slaughter even though downstream sales contracts do not offer guaranteed outlets. Poultry producers, therefore, suffer very strong pressure on prices, both upstream from the farmers, and downstream from buyers.

Within the context of the settlement procedure, the Fédération des Industries Avicoles (FIA) and 17 of the producers involved, representing almost the whole market, agreed on an unrivaled collective commitment to work towards establishing a far-reaching inter-branch organisation. It will aim for downstream integration by seeking the participation of major retailers.

Several administrative reports issued in 2013 and 2014 have shown that factors that would be decisive in the sector’s recovery can only be discussed within an interprofessional context. However, despite the urgent need for this inter-branch organisation, called for by both the public authorities and the actors themselves - all be they divided - has been struggling to see the light of day. A tight schedule has therefore been established for the fulfilment of this commitment; the first deadline is a maximum of eighteen months from notification of this decision. This urgency responds to a clearly identified general interest that is similarly an important goal for the public authorities.

The three commitments enforceable against the eighteen claimants are worded as follows:

1) Within 18 months of the Decision’s publication date, to establish and finance a Prefiguration Committee, and to initiate work and issue a report summarising the work carried out and the work still outstanding for the establishment of the inter-branch organisation,

2) To do their best to set up an inter-branch organisation for the poultry sector within a period of 3 years of the upcoming Decision’s publication date,

3) To propose to the Autorité de la concurrence the appointment of a Trustee responsible for monitoring compliance with the proposed commitments. The Trustee’s specific duties will include:

The concerted practices for which the fines have been imposed

The unlawful meetings and contacts that took place almost entirely at the initiative of the Fédération des Industries Avicoles, the FIA, went through two different phases, of differing intensity.

During this first phase, 2001-2006, manufacturers in the poultry sector held meetings and had contact, but with no particular regularity. Discussions at these meetings included: prices recorded on the market during talks about the economic situation; wholesale price targets, in particular in relation to the Rungis Market; recommended prices, including those set out in tables of recommended “consumer sale prices” for promotions, provided to supermarkets and hypermarkets. These unlawful discussions between competitors did not enable them to establish any real concerted agreement on prices that would drive the wholesale or retail prices on the relevant markets. However, they did significantly reduce uncertainty on each operator’s part when carrying out negotiations with the various distribution channels.

This period was marked by a highly elevated number of meetings (almost 60 meetings in one year). The explanation for these numerous meetings lies in the cereal price crisis (a doubling of prices over a few months) - as well as the manufacturers’ desire to pass on increased production costs in sales prices to the supermarkets and hypermarkets. These unlawful concerted practices allowed them to enter discussions with the distributors on the basis of mutual demands. A knock-on result was the distortion of the process since each bilateral negotiation was the subject of mutual monitoring. Despite the huge-scale nature of these meetings, they did not have the effect of emptying out the commercial discussions, which led to different results depending on the distributor and the producer, both in terms of the rate at which prices increased and the schedule for doing so. Generally speaking, the increases for which the producers collectively called were only partially accepted by the supermarkets and hypermarkets.

The discussions that took place on wholesale prices recorded were not in themselves pursuing any unlawful aim; such an aim could be easily achieved by legal means within the framework of a well-organised inter-branch organisation. Thus, drawing up anonymous market prices in conditions that do not harm competition could be carried out by the FIA, while respecting a few simple principles that have been set out in several opinions by the Autorité de la concurrence.

Furthermore, laws which came into force after 2007 now provide legal tools for regulating the conditions under which price increases can be passed on downstream of a sector in the event of excessive fluctuations. By way of example, Article 62 of Law No. 2014-344 of 17 March 2014 on consumption, known as the Hamon Law, provides that sales of goods for which prices have been significantly affected by price fluctuations of raw materials must include a price renegotiation clause that enables both upward and downward fluctuations to be taken into account.

These tools did not exist in 2007, at the time of the crisis experienced by the poultry manufacturers. This explains, although does not excuse, what might be termed the "informal or wild" interprofessional regulation put into place by the FIA to meet the urgent need. Once again, in this case, a well-organised inter-branch organisation should render this type of unlawful and ineffective behaviour obsolete.

The lump-sum amounts of the fines were established on the basis of the operators’ significance on the market and the great or lesser degree to which they participated in the concerted practices. They were then subject to additional reductions which took certain companies’ financial difficulties into account. 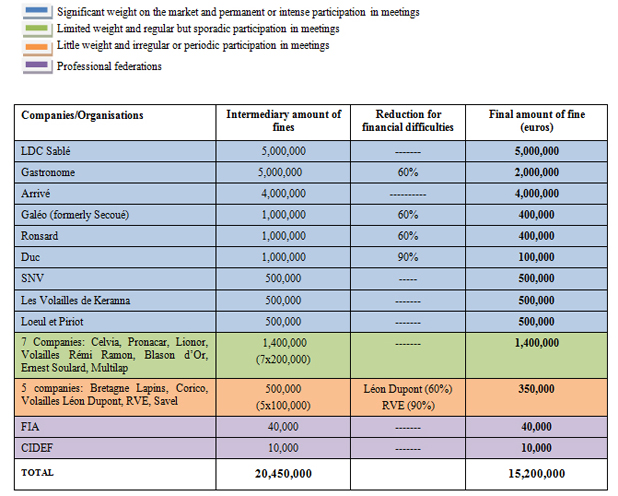 In addition, two professional bodies and around fifteen companies were either exonerated due to insufficient evidence of their participation in the concerted practices, or exempted from fines on the basis that they had gone into liquidation during the procedure or were suffering major financial difficulties. This is particularly true in the case of Doux, a major player in the sector at the time when the practices took place.

> For further details on this matter, see the full text of Decision 15-D-08 of 5 May 2015 concerning concerted practices in the sector for the sale of poultry meat