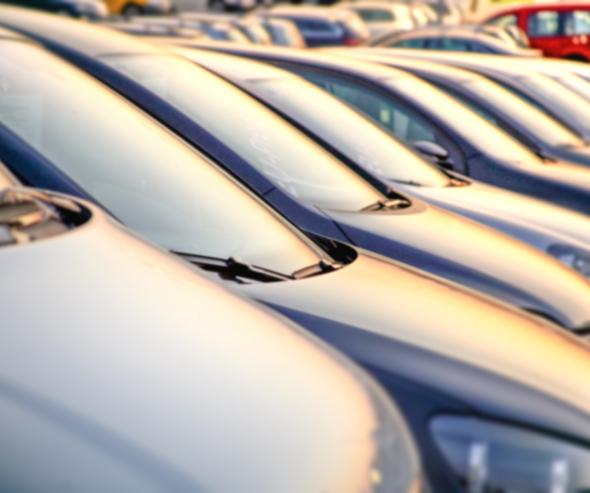 Noting in particular a significant increase in the prices of spare parts and vehicle repair & maintenance services since the late 1990s, the Autorité de la concurrence decided in July 2011 to open a sector-specific inquiry in order to examine the way competition operates within the sector and to identify any malfunctions.

Before issuing its definitive conclusions this summer, the Autorité is issuing its initial findings today for public consultation in order to allow all players to bring forward new elements and to contribute effectively to the development of effective competition in this sector to the benefit of both the industry and consumers. It invites interested parties to submit their comments before 24 May 2012.

The situation in the automotive after-sales sector in France

Alongside the United Kingdom and Belgium, France is among the European countries that have experienced the sharpest increases in price indexes for maintenance & repair, which could suggest that competitive pressures here are lower than in other countries such as Germany, Spain or Italy. Prices for maintenance & repair services thus increased by 28% in France between 2000 and 2010 in real terms (see sheet 1 of the press kit). 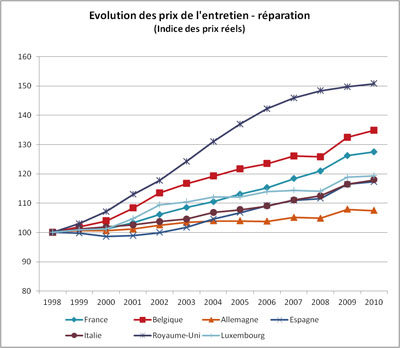 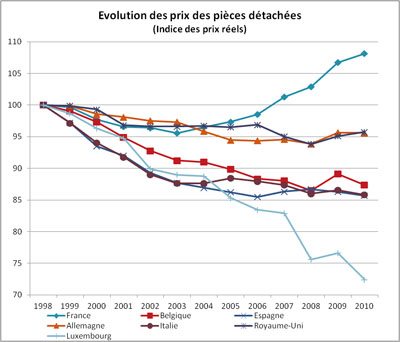 Source: Eurostat - consumer prices indexes for spare parts and accessories - base 100 in 1998

In French overseas départements, the Autorité de la concurrence also noted significant price differentials compared with mainland France. These differences, which cannot be exclusively attributed to procurement costs related to local taxation or transportation costs, may derive in particular from the special structure of the market in French overseas départements, where there is most often only one dealer per make.

2) Manufacturers’ networks are still ahead of independent networks, especially for repair & maintenance services for newer vehicles

The automotive after-sales sector is characterized by the coexistence of two supply networks for spare parts and repair services (see sheet 2 of the press kit). The manufacturers’ network comprises repairers who are authorized and mainly supplied by the manufacturer. The independent network comprises independent repairers who buy from wholesalers, who in turn buy replacement parts from automotive equipment manufacturers. The more the independent network is able to compete with the manufacturers’ network, for both the purchase and sale of spare parts as well as for repair and maintenance services, the more intense price competition will be, thus benefiting consumers.

The Autorité de la concurrence has identified five regulatory or behavioural factors that may limit the intensity of competition in the automotive after-sales sector.

In France, vehicles’ visible parts (wings, bonnets, bumpers, windscreens, lights, mirrors, etc.) are protected by industrial design rights (see sheet 3 of the press kit). In the spare parts market, manufacturers consequently hold a legal monopoly over 70% of visible parts sales, and are in duopoly with the automotive equipment manufacturers which also manufacture parts used during the manufacture of the vehicle for the remaining 30%.

Other countries, such as Germany, Spain or the United States have chosen to open up the visible spare parts market in practice or by law by introducing a so-called "repair" clause: the design of the parts is protected by copyright law for first-fit operations (new vehicles intended for sale), but is no longer protected, either in law or in practice, for the repair market. The various impact studies conducted in Europe and the U.S. show that this protection has the effect of increasing the price of visible parts by between 6% and 15% compared to countries where it does not exist.

By offering a greater number of operators the ability to distribute visible parts, the implementation of a repair clause would allow repairers, particularly auto body shops, to take better advantage of competition in terms of the pricing of visible replacement parts and to thereby gain independence from the manufacturers’ approved networks, both in mainland France as well as in the overseas départements.

Parts availability within the independent repairers’ channel is an important component of competition in the automotive after-sales sector.

Indeed, in mainland France as well as in the overseas départements, the ability of independent repairers to exert competitive pressure on the authorized repairers’ network particularly depends on their ability to procure parts from automotive equipment manufacturers that compete with the manufacturers’ network, thereby lowering prices. Conversely, when a part is unavailable within the independent channel, the manufacturer has a monopoly and can set a high price. Furthermore, in order to obtain these parts, the independent repairers are then forced to buy directly from dealers, at prices that are generally higher than those enjoyed by the manufacturers’ authorized repair network.

Regarding unprotected parts, the inquiry conducted by the Autorité de la concurrence shows that the availability rate of parts within the independent distribution network was low for newer models (availability rate of about 56% for models sold in 2010). Although it increases over time (the availability rate rises to 75% for vehicles sold in 2008), there appears to be significant fluctuation between manufacturers. The Autorité in particular examined the availability of parts with high sales that are used within the context of routine maintenance, from a sample of newer vehicles of 18 different makes (see page 70 of the document submitted for public consultation). The results show that a significant number of parts are not available within the independent channel. Although oil filters are generally available, this is not always the case with brake pads or windscreen wipers, and even less for timing belts or shock absorbers.

Websites that provide general technical information are not very standardized, to the extent that the multi-make independent repairer is unable to make effective use of many of the sites. In addition, not all information whose dissemination is covered by the EURO5 Directive is available on these websites. In order to access all the technical information required for the repair and to prepare the estimate (identification of the exact vehicle model, technical manuals, wiring diagrams, parts catalogues, etc.) and to identify the cause of the breakdown, independent repairers prefer so-called "multi-make" solutions, which are much less expensive than single-make tools.

These multi-make solutions are marketed through specialized intermediaries (publishers of technical information and manufacturers of diagnostic tools), who, in order to "integrate" all this data, must be able to access the technical information held by the manufacturers in the most efficient way possible. However, the integrators face many obstacles: the incompleteness and difficulty in updating the technical information, the delay in transmitting the data amounting to between 6 months and 1 year, data format requiring reprocessing, clauses preventing the use of data in the event of contract termination, high prices, etc.

The independent repairer therefore does not have technical information that is as complete as the authorized repairer: the coverage rate for multi-make tools is only 80%. The problems mainly concern the management of certain vehicles, resetting, remote and ECU reprogramming, interpretation of zero codes, the coupling of maintenance or repair data with protected data, or access to the digital owner’s manual. They may also have difficulty identifying reference numbers for spare parts and only be able to access information after a period of between 6 months and 2 years.

In some manufacturers’ warranty and extended warranty contracts in force in 2011, the Autorité de la concurrence found the presence of a number of clauses that reduce the ability of consumers to take advantage of the benefits of competition during the warranty period. These clauses are also likely to reduce the intensity of competition between authorized repairers and independent repairers, insofar as they encourage consumers to entrust the maintenance and repair of their vehicle to a repairer belonging to the manufacturer’s network throughout the warranty period.

These clauses include, for example, the linking of the benefit of the warranty to the maintenance being performed within the manufacturer’s network and the use of the manufacturer’s original parts. Or even the shifting onto the consumer of the burden of proving that the vehicle’s defect is not due to maintenance work being performed outside of the authorized network. A number of consumer complaints have been recorded, and an investigation conducted in 2011 by the DGCCRF (Directorate-General for Competition, Consumer Affairs and Prevention of Fraud) resulted in reminders of regulations being sent to several manufacturers who are obliged to amend their contracts.

Manufacturers and automotive equipment manufacturers communicate the recommended or maximum retail prices to repairers, who apply them very rigorously even though they receive significant and differentiated discounts depending on the operator. The relative transparency of these recommended prices, their uniformity (the same automotive equipment manufacturer would thus recommend identical retail prices regardless of which wholesaler buys and resells its products) and their general application can reduce competitive uncertainty and, consequently, discourage more aggressive pricing policies for the wholesale and retail distribution of spare parts.

The public consultation opened today asks 26 questions about the various ways to remove these obstacles to effective competition. One of the objectives is to have a reasoned debate concerning the possible options presented by the consultation document and to measure their effect on safety, innovation, pricing, competitiveness and employment in the automobile sector.

> Full text of the document submitted for public consultation (in French)