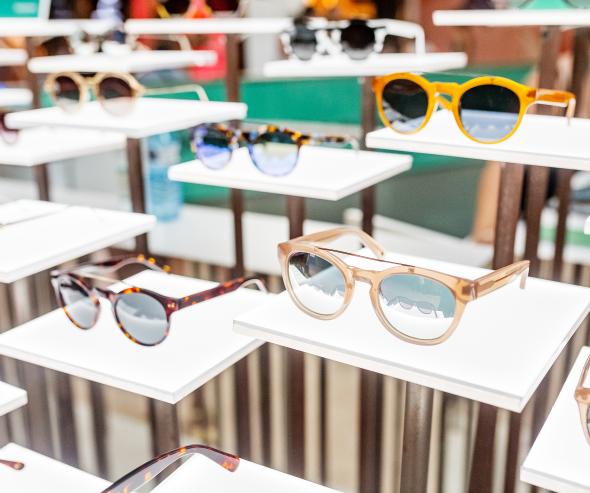 The Autorité fines several eyewear brands and manufacturers, including the leading global and European supplier, for imposing selling prices on opticians and prohibiting them from selling on the Internet.

Following dawn raids and a report by the Directorate General for Competition Policy, Consumer Affairs and Fraud Control (DGCCRF), the Autorité de la concurrence has fined several companies active in the sunglasses and glasses frames sector for limiting the freedom of opticians to set prices and/or prohibiting selling their products online

The companies involved are the following: 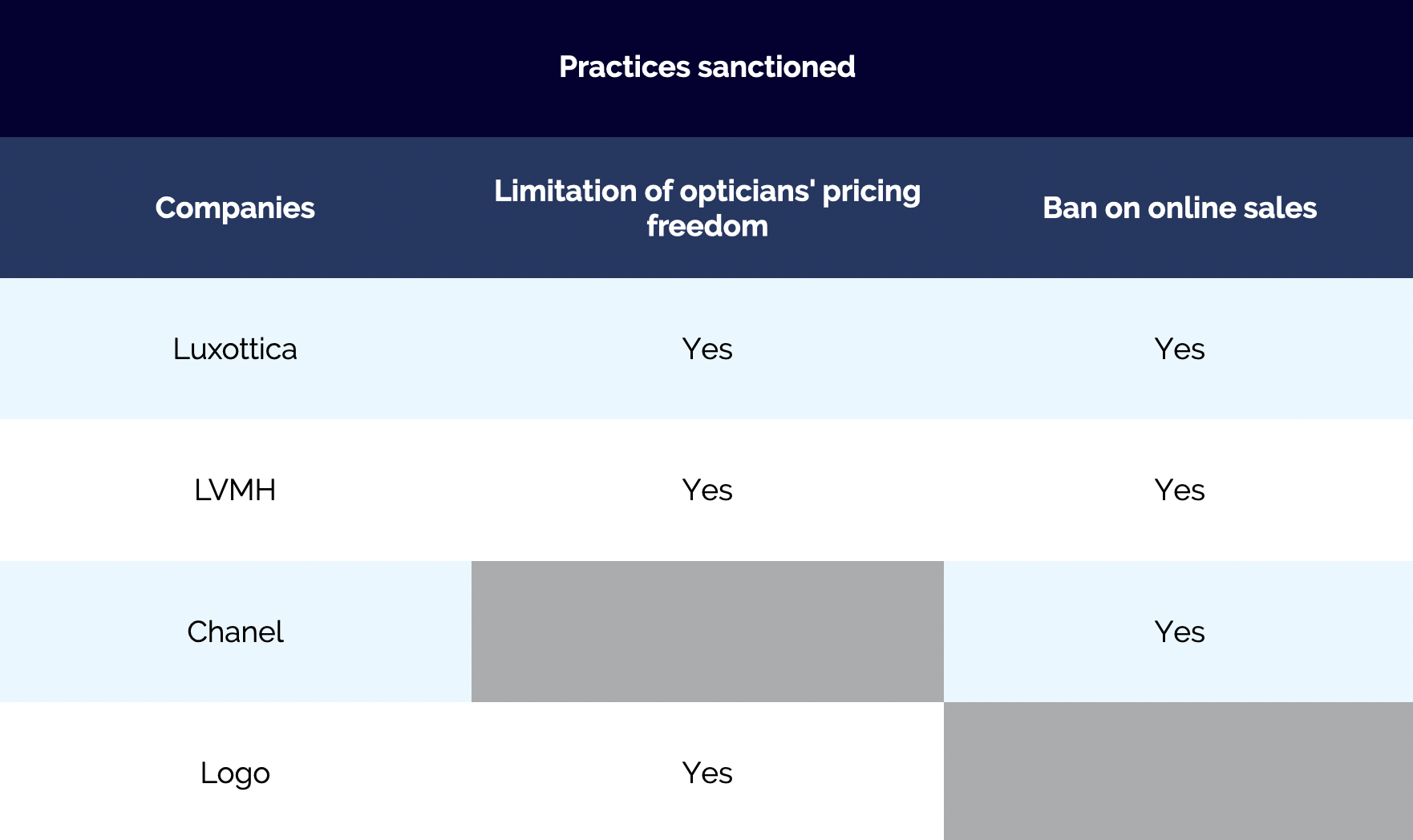 Logo and LVMH wished to benefit from the no contest of objections procedure1. Logo was, moreover, placed in judicial liquidation back in 2016.

In total, the Autorité imposed the following penalties: 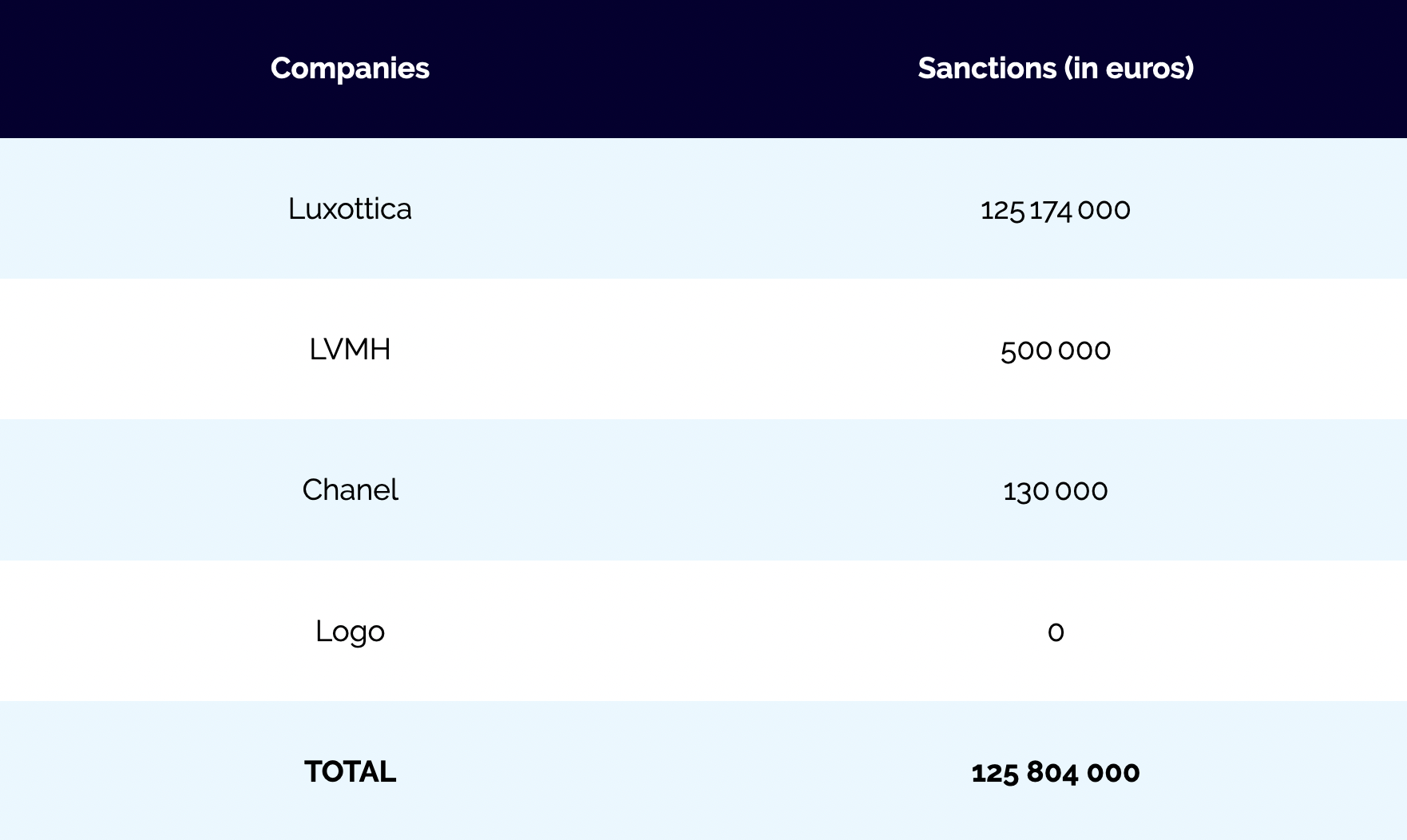 1The no contest of objections procedure allows a company which does not contest the objections notified to it to obtain a penalty reduction. This procedure has since been replaced by the settlement procedure.

LVMH and Logo (for the TAG Heuer brand), as well as Luxottica (for all its brands, including Chanel, Ray-Ban, Oakley, Prada, Burberry, Bulgari, Dolce & Gabbana, Armani, Michael Kors, Miu Miu and Ralph Lauren) have limited the pricing freedom of their retailers.

As far as LVMH and Logo are concerned, the clauses in LMVH's licence agreements for the TAG Heuer brand and in Logo's selective distribution agreements for that brand provided for a framework for prices and promotions by opticians. In addition, Logo provided recommended prices, monitored the prices applied by opticians and contacted those who offered discounts. These practices covered the periods from September 1999 to 2015 for LVMH and from 2002 to 2015 for Logo.

With regard to Luxottica, the Autorité noted that, between 2005 and 2014, it had distributed so-called "recommended" prices to its retailers and encouraged them to maintain a certain retail price point for its products. In particular, Luxottica drew up lists of "recommended prices" and entered into selective distribution agreements with its retailers, which were interpreted as prohibiting discounts and special offers for retail selling, among other things.

In addition, Luxottica imposed certain restrictions on its retailers in terms of their price advertising and organised the monitoring of these prices, requesting the help of some of its retailers to "combat the abuses observed". According to the manager of an optical store, this monitoring by competitors was akin to a real "price police".

Lastly, opticians who persisted in ignoring Luxottica's messages were subjected to retaliatory measures, such as delaying or suspending deliveries to their stores, withdrawing the authorisation required to distribute certain Luxottica brands or blocking their accounts to prevent them from placing orders.

These practices, which are anticompetitive by their very nature, are serious. In particular, they have involved the use of monitoring and retaliation mechanisms. Moreover, they had an impact on end consumers, some of whom are captive and vulnerable, as the purchase of glasses and, in some cases, sunglasses, is a necessity.

They also caused significant damage to the economy, insofar as they concerned well-known brands, affected intra-brand competition (price competition for the same product within different networks) over a long period of time, and involved a significant proportion of retailers, including major national retailers such as Alain Afflelou, Krys, GrandVision and Optical Center.

Clauses in the licensing agreements between Chanel and Luxottica (from 1999 to 2014) and between LVMH and Logo (from 2004 to 2015), as well as clauses in the authorised retailer charters signed by Luxottica and its authorised retailers (from 2002 to 2013) for the Chanel, Prada, Dolce & Gabbana and Bulgari brands, prohibited the online sales of sunglasses and glasses frames by opticians.

These practices have a certain degree of severity, as they have had the effect of depriving opticians and final consumers of a sales channel generally characterised by competitive prices. Their severity must, however, be mitigated, particularly in light of the uncertainty as to their lawfulness that existed until the Pierre Fabre judgment of 13 October 2011 by the Court of Justice of the European Union2.

Furthermore, the Autorité considered that the damage to the economy caused by these measures was very limited, due to the limited growth in Internet sales, at least for glasses frames.

In light of all these elements, and taking into account, for LVMH, the no contest of objections procedure, and, for Logo, its financial situation and its placement in judicial liquidation since 2016, the Autorité has imposed the following penalties:

2 In this judgment of 13 October 2011, the Court of Justice of the European Union held that banning selling on the Internet constitutes a restriction of competition by object.