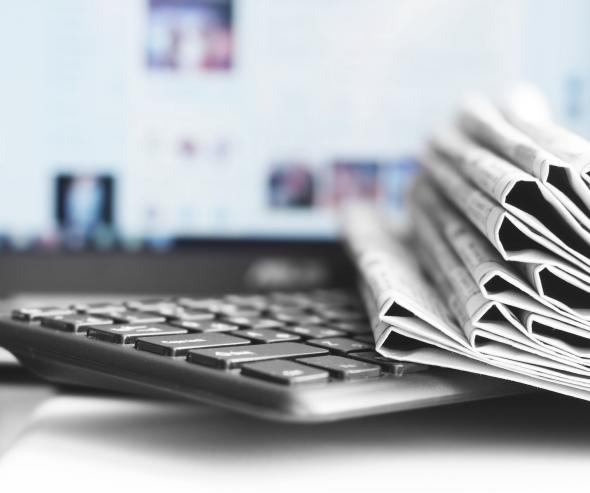 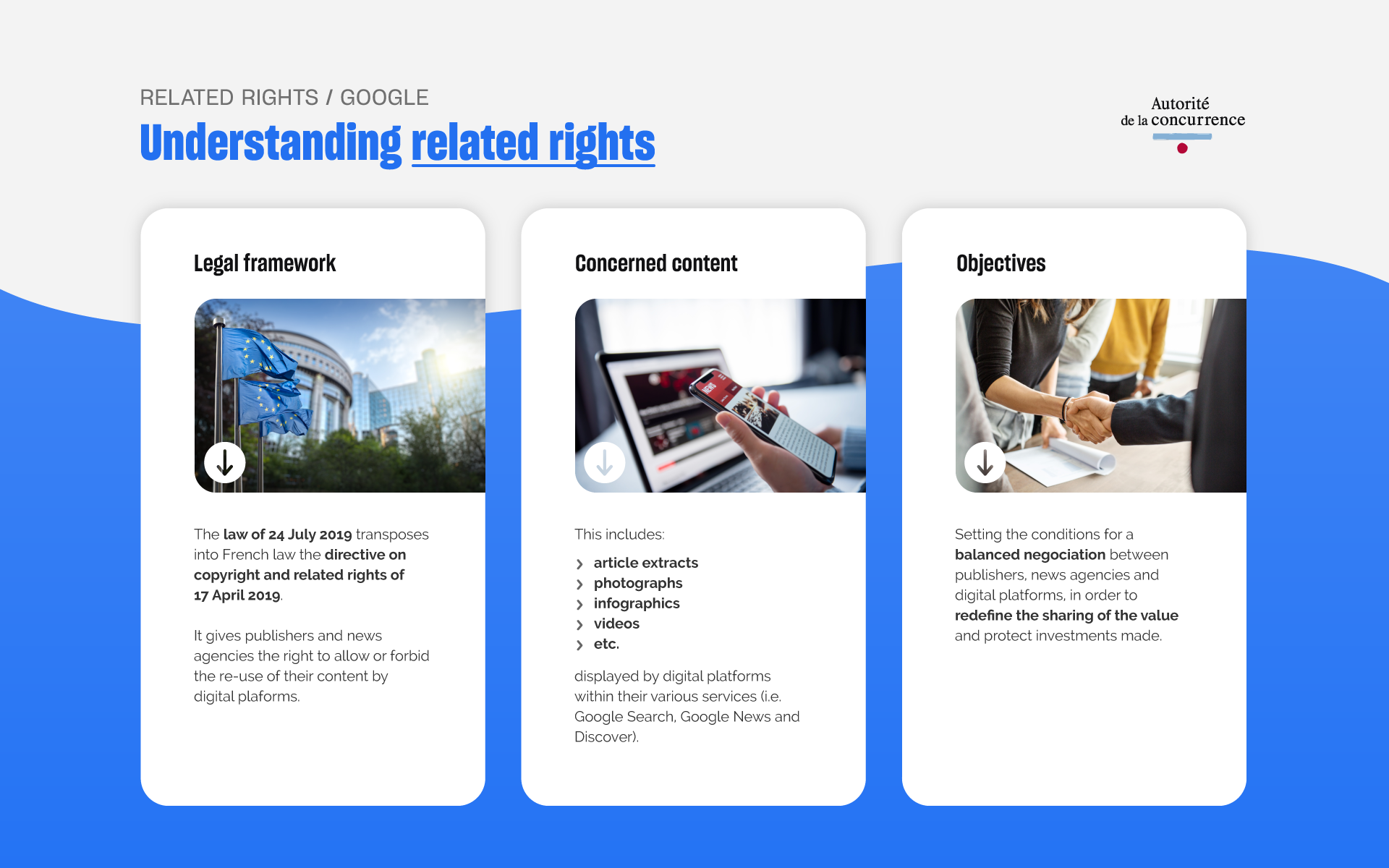 Today, the Autorité de la concurrence issues a decision in which it accepts the commitments of Alphabet Inc, Google LLC, Google Ireland Ltd and Google France (hereinafter "Google") and closes the proceedings on the merits initiated in November 2019 by SEPM, APIG and AFP, which denounced practices implemented by Google following the adoption of Law No. 2019-775 of
24 July 2019 aimed at creating a related right for the benefit of press agencies and publishers (hereinafter, the "Law on Related Rights").

As a reminder, in April 2020, the Autorité issued injunctions in the context of urgent interim measures against Google (Decision 20-MC 01 of 9 April 2020/see press release), pending the decision on the merits. It then enjoined the company to negotiate in good faith with press agencies and publishers for the remuneration due for the use of their protected content (inclusion of press photos and articles on the Google Search engine and its Google News and Discover services). In July 2021, it was then led to fine Google 500 million euros for non-compliance with these injunctions (Decision 21-D-17 of 12 July 2021/see press release), enjoining Google to comply with its interim measures decision, subject to a periodic penalty payment.

In the course of the investigation into the merits of this case, competition concerns were identified and formalised in a preliminary assessment. Following the communication of this assessment, Google proposed a first set of commitments in December 2021, which were subjected to a market test (see press release of 15 December 2021). Following a hearing in April 2022 before the Board, Google successively sent four new versions of these commitments as well as a final proposal on 9 May 2022, in order to address both the concerns expressed in the market test and those of the Board.

Benoît Cœuré, President of the Autorité de la concurrence stated about today's decision: "After issuing interim measures in April 2020 and then fining Google 500 million euros in July 2021 for  non- compliance with these injunctions, the Autorité today welcomes the commitments taken by Google in the context of the procedure on the merits. The combination of these different means of action now makes it possible to create an environment offering more stability and guarantees of fairness for publishers and press agencies. For the first time in Europe, the commitments taken by Google provide a dynamic framework for negotiation and sharing of the information necessary for a transparent assessment of the remuneration of direct and indirect related rights. This framework will improve assessment methods and facilitate the transmission by Google of the information necessary for them. The commitments contain a complete system from the start of the negotiations to their conclusions, all under the supervision of a monitoring trustee, whose opinions will be binding on Google, and who may be assisted by experts in intellectual property, finance or press or publicity.

They also include measures that will make it possible to find a solution in the event of a deadlock by the intervention of an arbitration court, the costs of which will be borne by Google.” 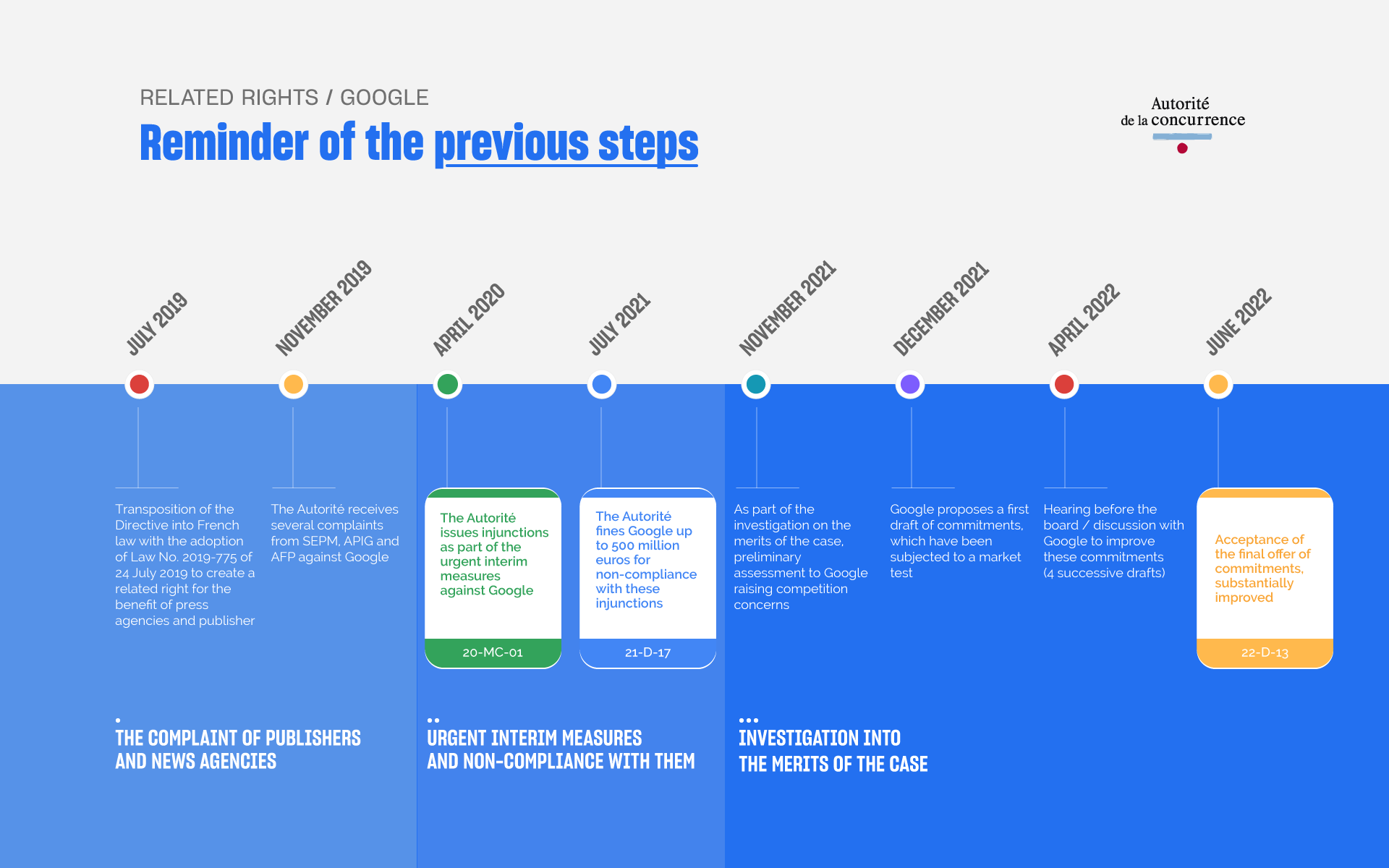 Reminder of the reported practices and the previous procedural steps

Considering serious and immediate damage to the press sector, in April 2020 the Autorité issued interim measures aimed at compelling Google to implement a good faith negotiation, in order to formulate a financial proposal for the use of the protected contents of press agencies and publishers (20-MC-01).

Despite these injunctions, in a decision of non-compliance with the injunctions (21-D-17 of 12 July 2021), the Autorité found in July 2021 that Google had been able to frustrate negotiations with press agencies and publishers on the current use of protected press content on its services. In particular, it found

In the course of the investigation into the merits of the case, the Investigation Services formalised several competition concerns relating to Google's behaviour in a "preliminary assessment" document. These concerns are based on three issues.

First, Google may have imposed unfair trading conditions on press agencies and publishers, constituting an abuse of a dominant position within the meaning of European Union competition law (Article 102(a) of the TFEU and Article L. 420-2 of the French Commercial Code (Code de commerce)), by refusing to negotiate and pay for the display of protected press content on Google's existing services under related rights.

Secondly, by imposing zero remuneration for all press agencies and publishers when the Law on Related Rights entered into force, independently of an examination of their respective situations, Google is likely to have treated identically economic stakeholders placed in different situations without any objective justification, and, therefore, to have implemented a discriminatory practice constituting an abuse of a dominant position within the meaning of Articles L. 420-2 of the French Commercial Code (Code de commerce) and 102 (c) TFEU.

Lastly, Google may have abused its dominant position to circumvent the Law on Related Rights, in particular by using the possibility for news agencies and publishers to grant free licences to systematically impose a principle of non-remuneration for the display of protected content on its services, without any possibility of negotiation, and by refusing to communicate the information necessary for determining the remuneration. 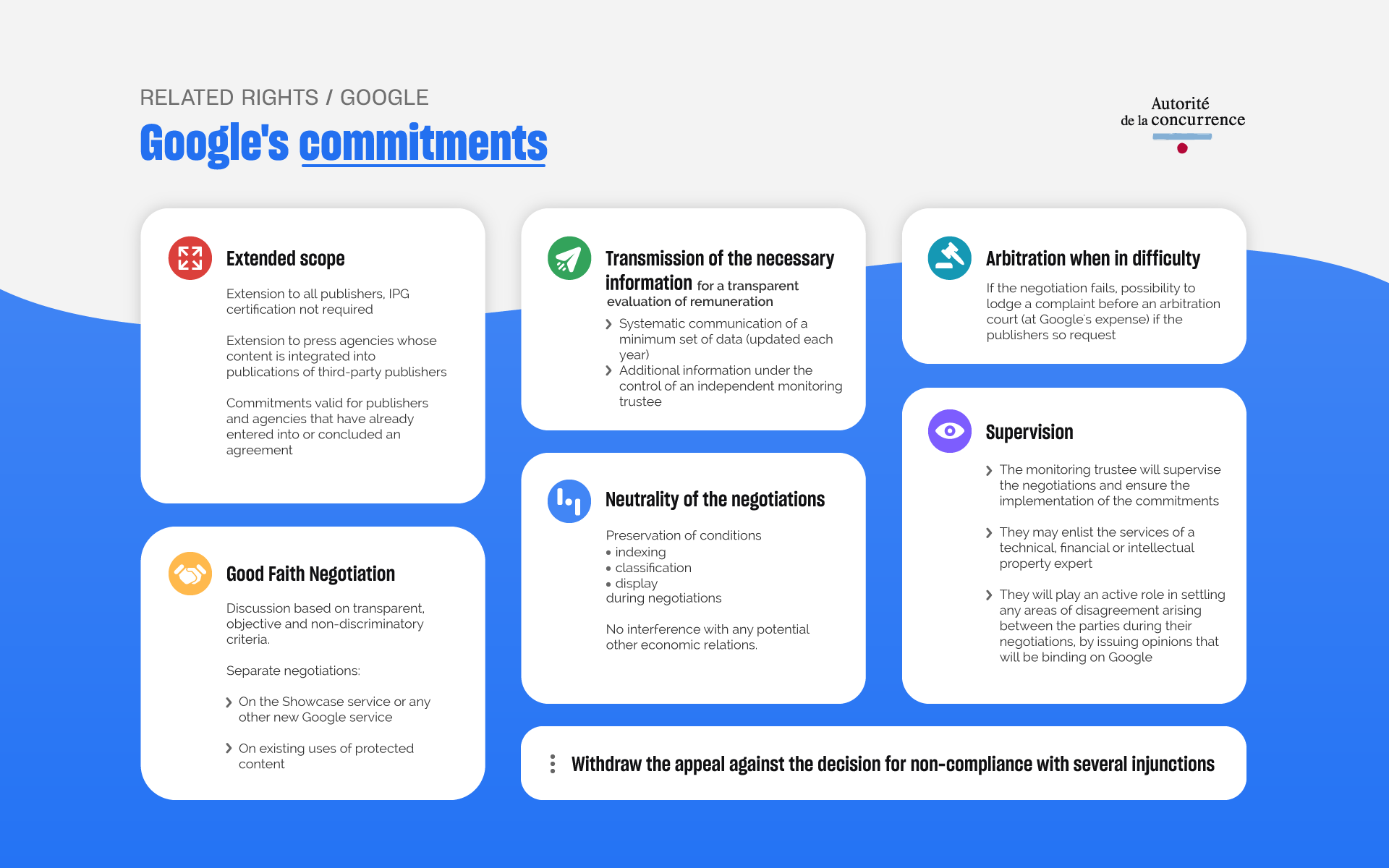 As a result of the preliminary assessment, Google submitted a set of commitments on 9 December 2021. These commitments were the subject of a market test and were discussed during a hearing before the Autorité. Following this hearing, Google released four successive versions of commitments, ultimately resulting in a substantially improved final proposal on 9 May 2022.

Google has extended the scope of application of its commitments to all publishers covered by Article L. 218-1 of the Intellectual Property Code ("IPC"), whether or not they have IPG certification. The same applies to related rights of press agencies that are integrated into third party publications and which are now expressly covered.

Google also proposes extending the provisions of its commitments to press agencies and publishers that have already entered into negotiations or concluded a contract with Google for related rights, either directly or through a professional association. Press agencies and publishers with existing agreements will be able to amend or terminate those agreements at no cost to them so they can engage in new negotiations with Google, with the understanding that the compensation agreed to under their pre-existing agreements will continue to apply until the date of this amendment or termination.

Google undertakes to "negotiate in good faith" with press publishers and news agencies that so request, the remuneration for any reproduction of protected content on its services in accordance with the modalities laid down in Article L.218-4 of the IPC and according to transparent, objective and non-discriminatory criteria. Google expressly agrees to conduct separate and independent negotiations regarding the Showcase service or any other new Google service, and regarding existing uses of protected content.

Google undertakes to communicate the information necessary for a transparent evaluation of the proposed remuneration, as provided for in Article L.218-4 of the IPC.

To this end, Google has planned to transmit, as a first step, a "base" of minimum information to each negotiating party within ten workdays for individual negotiations and 15 workdays for collective negotiations. This base includes the number of printings and click-through rates of protected content on Google Search, Google News and Google Discover, as well as data relating to Google's revenues in France, whether direct, indirect or resulting from its role as an intermediary in online advertising.

As a second step, Google will provide the additional relevant information requested by press agencies and publishers within 15 workdays, under the supervision of an independent trustee. The trustee may issue an opinion, which will be binding on Google, on the technical feasibility or relevance of such requests. It will take measures to preserve the confidentiality of the information, where necessary. The most sensitive data (such as Google's Search ads and Display ads revenues in France) will only be shared with the trustee and its experts. This mechanism will reconcile Google's legitimate request to protect its business secrets with the need for press agencies and publishers to obtain the information necessary to assess Google's direct and indirect revenues from the display of their protected content.

Google undertakes to take the necessary steps to ensure that the negotiations do not affect the crawling, ranking or presentation of the protected content and do not affect any other economic relationship that may exist between Google and the news agencies and press publishers;

Google undertakes to withdraw its appeal against the decision on non-compliance with injunctions The fine of 500 million euros imposed by the Autorité on 12 July 2021 is therefore final.

Arbitration procedure in the event of difficulties

Google undertakes to make a proposal for remuneration within three months of the start of negotiations. In the event that the parties are unable to reach an agreement at the end of this negotiation period, the negotiating parties will have the option of referring the matter to an arbitration tribunal to determine the amount of remuneration. To take into account the limited financial resources of press agencies and publishers, they may, if they wish, ask Google to pay the arbitrators' fees in full, both for the first proceedings and for any appeal proceedings.

Monitoring of commitments by an approved independent trustee

An independent trustee approved by the Autorité will ensure the implementation of the commitments taken and may, if necessary, call on the services of a technical, financial or intellectual property expert.

The trustee will, where appropriate, play an active role in resolving any points of disagreement that arise between the parties in the course of their negotiations, by issuing opinions to the Autorité or making proposals on any dispute relating to the certification of a press publisher or agency, on whether a press publisher's domain contains protected content, on the technical feasibility or appropriateness of a request for additional information, and on the manner in which responses to requests for additional information should be communicated to press publishers and agencies. While the opinions and proposals are not binding on press agencies and publishers, Google has committed to comply with them. This mechanism provides a quick way to resolve disputes that, while binding on Google, preserve the freedom of press agencies and publishers to pursue their claims through other legal avenues if they see fit. 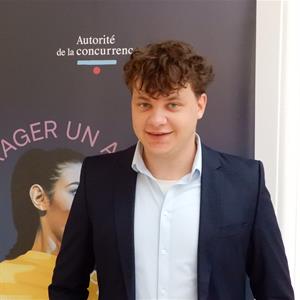