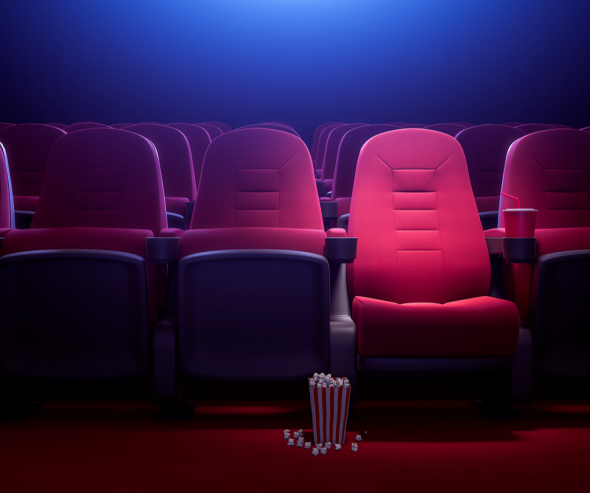 Amid the amplification of the phenomenon of cinema screen congestion, due in particular to the periods of reduced access or closure of said rooms, in 2020 and 2021, related to the Covid-19 health crisis, the Autorité issues an opinion on a consultation project for distributors on a film release schedule when cinemas reopen in 2021.

The Autorité is fully aware of the inadequacy of the current mechanisms to deal with the amplification of the phenomenon of screen congestion and is also keen to inform companies about the compatibility with competition law of cooperative behaviour considered to respond to the crisis. Also, although there is no precise draft agreement to date, the Autorité has endeavoured to provide stakeholders with a general analysis grid accompanied by elements of assessment, in order to enlighten them on how the future agreement might meet the requirements for obtaining an individual exemption.

In the current state of the law, the Autorité considers that a temporary agreement of this type is likely to constitute an agreement prohibited by national and European competition law but that it could, on the other hand, in a litigation framework, benefit from an individual exemption, provided that a certain number of criteria are met. 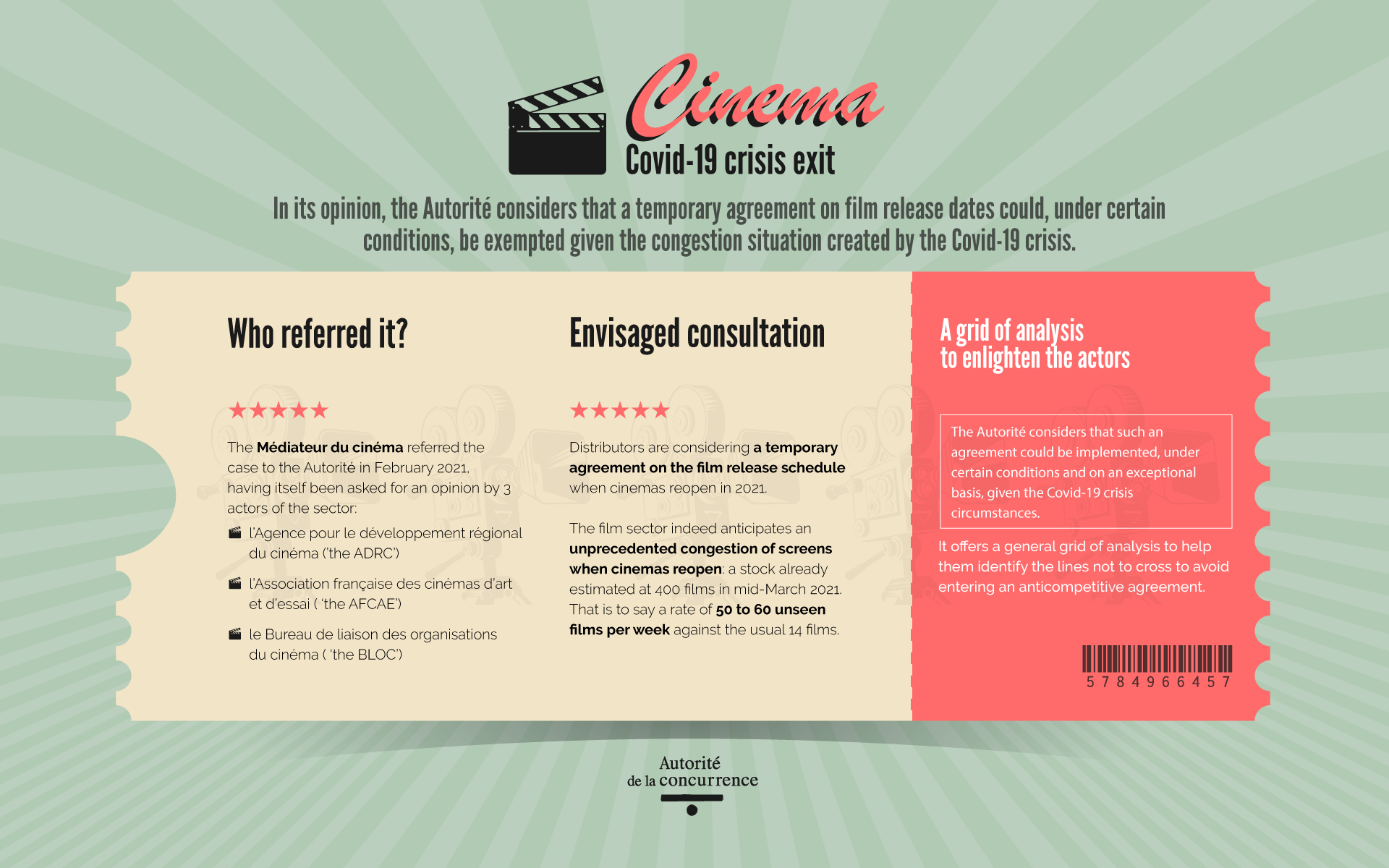 In February 2021, the Autorité was asked by the Médiateur du cinema (Cinema Mediator) to give an opinion on the possibility of consultation between film distributors aimed at temporarily setting up a regulated film release schedule, until a return to a normal situation. The Médiateur expressed, during the investigation, the wish that "the opinion issued by the Autorité sets out the framework of what it is possible to do, at this stage", in order to allow distributors to engage in negotiations.

The Covid-19 health crisis has deeply affected the film industry. While the congestion of cinema screens with a growing number of previously unreleased films is not a new phenomenon, it will increase, in unprecedented proportions, when cinemas reopen in 2021.

Indeed, distributors will not only wish to release films whose release on screens, initially scheduled for 2020, was prevented, but also to rerun certain films already presented in cinemas in October 2020 and whose exploitation was interrupted due to the second closure of cinemas, especially those which won awards during the Césars 2021 Ceremony. In addition, they will also have to broadcast films scheduled for release in 2021.

In mid-March 2021, the stock of films concerned was estimated at around 400, which would imply, according to the BLOC, a release rate of 50 to 60 films per week to issue within a reasonable time (for comparison , according to the Médiateur, “since 2016, the average number of new films that are released each week is around 14”). 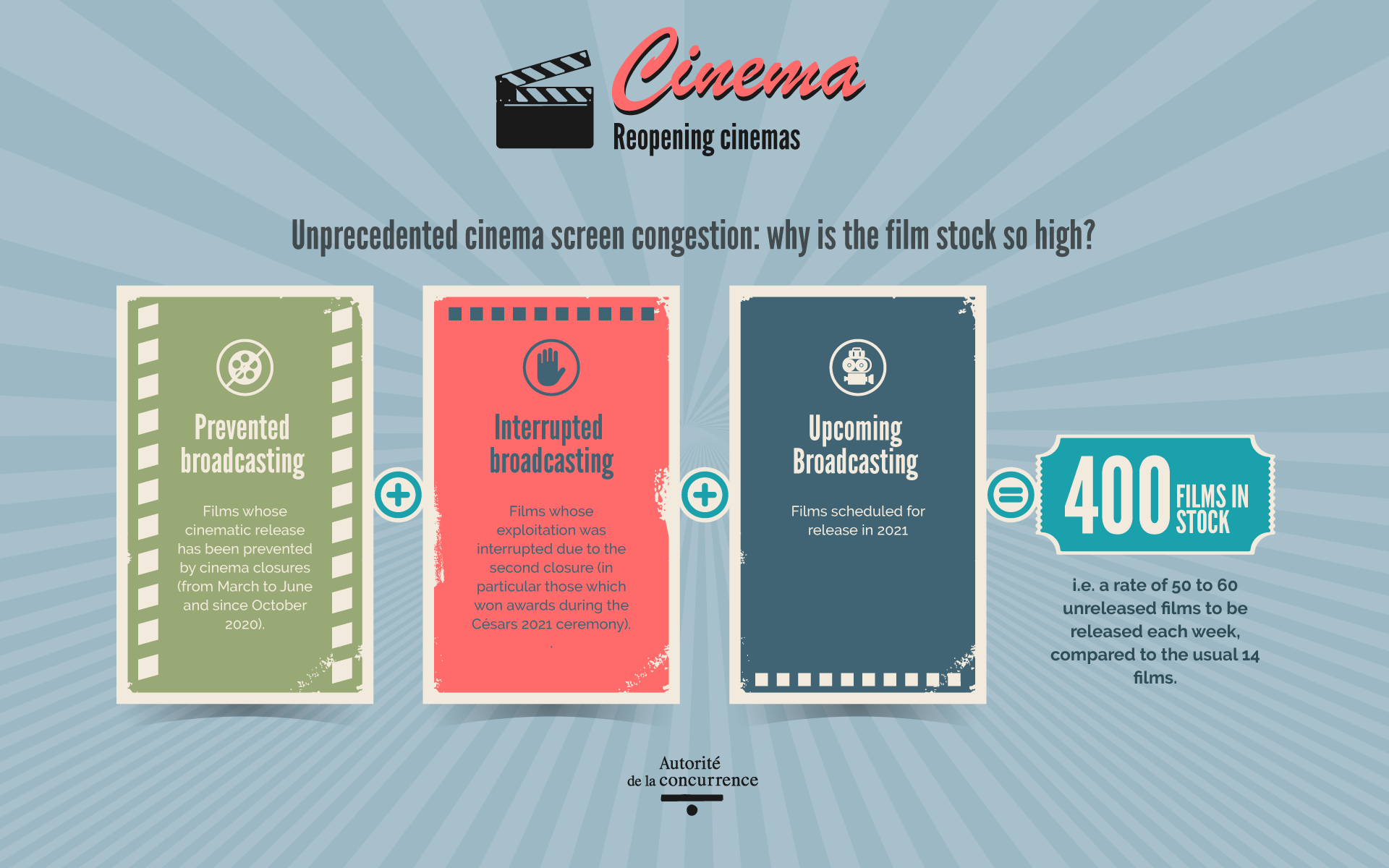 The scope of the Autorité's opinion

In a referral for an opinion, the Autorité can only rule on general competition issues and not on whether a practice infringes competition law.

Nor can the Autorité, in the context of its advisory functions, rule on the possibility of granting a practice the benefit of an exemption.

It cannot therefore implement a “ruling” type procedure, which would consist in issuing a formal position statement to secure initiatives or projects, upstream of their implementation.

In addition, to these inherent limits in the framework of any referral for opinion to the Autorité, there are specific limits linked to the absence, to date, of a project or precise model of agreement under negotiation within the film industry. Thus, a certain number of essential parameters of this possible agreement, such as its parties, its content and its duration, are therefore still undetermined.

Despite the constraints and limitations mentioned above, the Autorité intends to take into account the exceptional context resulting from the Covid-19 pandemic. From the outset of the health crisis and in line with the common message sent by the European competition network to businesses in March 2020, it has always shown itself to be concerned with enlightening businesses on the compatibility of cooperative behaviours with competition law considered to respond to this crisis. It is also aware of the inadequacy of current mechanisms to cope with the amplification of the phenomenon of cinema screen congestion mentioned above. This is why it endeavoured to provide, as part of its opinion, a general analysis grid, accompanied by elements of assessment, on the conditions that could make a temporary consultation between film distributors on the release dates of the films in cinema in compliance with competition law.

As a preliminary point, it should be noted, on the one hand, that, subject to contrary legislative provisions, competition law applies to the cinematographic sector and, on the other hand, that the existence of a crisis cannot in itself exclude the anticompetitive nature of an agreement.

At the end of the investigation and the hearing, it appears that among the various options considered, that of an agreement between distributors, limited in time, on a sufficiently upstream transparent and organised determination of a film release schedule seems to be one of the best suited options, at this stage, both to overcome the inadequacies of the current mechanisms and to form the subject of a certain consensus - to the exclusion, of course, of actors having specifically express their opposition to any form of consultation. The elements of assessment, presented by the Autorité below, will therefore be based on this sole assumption.

The envisaged consultation, in that it would bring together film distribution companies for the purpose of drawing up a film release schedule, reflects a competition of wills between legally distinct and economically independent companies, taking the form of an agreement, and could be classified as an agreement within the meaning of competition law.

Insofar as the envisaged consultation project would be likely to relate to a large number of films, whether or not they are French, and in view of the very large number of films to be released in cinemas in France when they reopen in 2021, it is not excluded, moreover, that it could appreciably affect trade between Member States, which would make European competition law applicable in this case.

Moreover, it is not excluded either that an agreement between film distributors relating to the date of film release in cinemas could be considered as involving a restriction of competition by object (sharing of the market over time) or by effect (removal of one of the parameters on which distributors compete and / or difficulty, for certain distributors not participating in the agreement, to broadcast their films).

On the possibility of obtaining an exemption

The consultation project submitted for an opinion to the Autorité would be a horizontal type agreement which could not, by definition, benefit, in a litigation framework, from the provisions of exemption regulation No. 330/2010 relating to vertical agreements. Moreover, given its nature, it does not appear either to be able to benefit from the provisions of the exemption regulation relating to specialisation agreements or that relating to research and development agreements.

On the other hand, in a litigation framework, the parties to the agreement could, under certain conditions, benefit from an individual exemption.

In this regard, parties to the agreement should:

The distributors could, in this regard, endeavour to show that the concertation would be limited in time, would relate only to the release date of the films in cinemas and that, if necessary, competition between them could subsist on all the other parameters, such as the number of establishments in which the films would be broadcasted, the number of copies of the films, the screening times, the duration of the films' exposure as well as the commercial negotiations with the cinema operators concerning both the choice of films only on the economic parameters of the contracts.

As soon as the parties to the agreement demonstrate that the conditions recalled above are met, the Autorité considers that an agreement between distributors on a time-limited schedule for the release of films when the cinemas reopen could, in this particular context, benefit from the individual exemption provided for in paragraph 3 of Article 101 TFEU and in 2 ° of I of Article L. 420-4 of the Commercial Code.