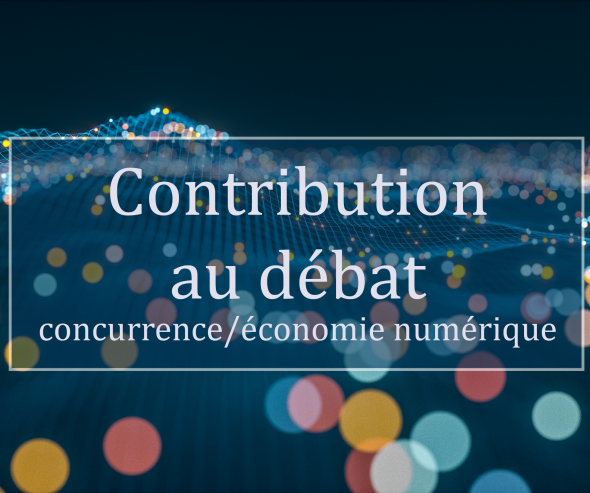 The Autorité de la concurrence publishes its contribution to the debate on competition policy in light of the challenges arising from the digital economy. It is thus taking part in the ongoing discussions on the reform of competition law at European and worldwide levels, by reviewing its analysis and proposing options for reform.

Given that numerous reports on competition law reform and the digital economy were issued in 2019 and many initiatives should emerge at international, European and national levels in 2020, the Autorité de la concurrence shares its thoughts and propositions to tailor the actions of competition authorities to the challenges posed by the digital economy.

The Autorité’s contribution addresses the treatment of anticompetitive practices in the context of the digital economy, along with challenges pertaining to merger control.

Its input includes evolutions which could take place without affecting existing legislation, along with those that would require changes to the legal framework. To this end, the Autorité de la concurrence suggests, among others, elements to help define structuring platforms.

Anticompetitive practices in the digital economy

The Autorité emphasizes that competition law is a particularly efficient tool to maintain the competitive dynamics of the digital economy. Competition law is flexible, and its concepts can adapt to new practices, without requiring legislative intervention.

Competition authorities have displayed their ability to control digital players’ behaviours through innovative reasoning or by applying already established solutions to new services, for instance in cases linked with operating systems (the Google Android case of the European Commission), online advertising (Google AdSense case of the European Commission or the Google / Gibmédia case handled by the Autorité), a “vertical” search engine (Google shopping case of the European commission) or again with social media and data collection (Facebook case handled by the Bundeskartellamt in Germany, 2019).

These examples show that, via an innovative practice if required, competition authorities are committed to handling effectively the issues raised by the digital economy, and to advancing their analysis on the basis of established law.

The Autorité reflects upon the possible adaptations of the notions of dominance and essential facility to take into account the characteristics of the digital economy, marked by the importance of data or the existence of large user communities.

It underlines the relevance of using interim measures and commitment procedures in the digital sector, which enable swift and proportionate intervention. The Autorité is in favour of greater use of interim measures at European level, which could entail a modification of the applicable legal standard.

The Autorité explores the adoption of provisions targeting « structuring » operators

In its contribution, the Autorité explores the possibility of complementing competition law, at national or European level, with a mechanism allowing to address harmful anticompetitive behaviours implemented by « structuring » operators.

These operators have acquired such importance that some of their behaviours can affect the proper competitive functioning of the markets where they are dominant and beyond, due to their development and projection capabilities in connection with their financial capacity, important network effects linked with their large user community or the data they can access.

Different behaviours implemented by these structuring platforms can indeed be problematic from a competition law point of view. These can consist in: discriminating against competing products or services, foreclosing markets where they are not structuring, using data on a dominated market to impede access to that market, hampering the interoperability between products or services, or data portability, or multi homing. Yet it may not always be possible to characterize an abuse of dominance, in view of the current standard.

The Autorité de la concurrence thus proposes a definition of « structuring digital platforms » which could be implemented in competition law, at national or European levels. In this framework, a new legal regime would allow to prevent and sanction anticompetitive behaviours by these “quasi-dominant” operators and impose on them enforceable obligations in terms of interoperability, non-discrimination and access to data.

The relevant competition authority could thus, on a case by case basis, either accept commitments and make them mandatory, or order the company to modify its behaviour in response to the identified competition concern –  subject to a fine if necessary –, or it could sanction the anticompetitive behaviour ex post.

Merger control in the digital economy

The Autorité notes the lack of control of certain transactions below thresholds liable to raise competition concerns.

The numerous transactions by tech giants revealed a legal gap that could lead to certain transactions not being reviewed by competition authorities when they involve an innovative, nascent player or a company that has not yet monetized its invention.

In this context, the Autorité considers that it is also useful to review the adaptation of competitive analysis to digital challenges, especially by taking into account potential competition, analysing conglomeral effects and the relevant time scale of the analysis. Furthermore, the importance of data and the creation of large user communities are areas on which the Autorité will keep an especially close watch.

A better use of existing tools: the use of behavioural remedies and the application of Article 22 of Regulation 139/2004

The Autorité has looked into the use of behavioural commitments in the digital economy. It also contemplates the use of the mechanism under article 22 of Regulation 139/2004, whereby a national competition authority may request the European Commission to examine a merger that threatens to significantly affect competition within its territory.

The introduction of merger control mechanisms specific to the digital economy, with special reference to structuring platforms

In its contribution, the Autorité considers the relevance of introducing a mandatory information requirement of every merger carried out by digital structuring platforms.

In addition, it suggests to vest in competition authorities a power to order the notification of mergers below turnover thresholds when such transactions likely raise competition concerns, provided specific conditions are met.