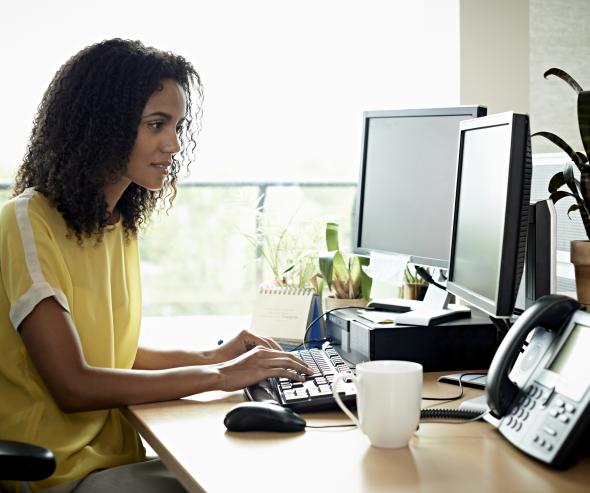 France Télécom may ask to be remunerated for opening additional capacity but it must clarify the commercial and billing relationship between its Internet access and Internet transit businesses.

The transparency commitments made by France Télécom to the Autorité de la concurrence will facilitate the prevention and monitoring of potential margin squeezes in the future.

In this case, the US telecommunications operator Cogent claimed, among other things, that France Télécom was compromising the peering system (enabling exchange of traffic flows between networks, free of charge) used by transit operators, by requesting payment for opening up additional technical capacity for access to Orange subscribers. Regarding this claim, the Autorité considered that in view of the highly asymmetric nature of the traffic exchanged between France Télécom and Cogent, such a payment request does not in itself constitute an anti-competitive practice inasmuch as this type of remuneration is not uncommon in the Internet industry in cases where a significant imbalance exists between the incoming and outgoing flows exchanged between two networks, and is consistent with the overall peering policy adopted by France Télécom, with which Cogent is familiar.

However, the Autorité also noted a certain lack of transparency in the relationship between the domestic network of France Télécom (Orange) and its transit operator business (Open Transit), creating a potential for margin squeezes. France Télécom agreed to make commitments to prevent such situations and enable appropriate monitoring.

Three types of stakeholder operate in the Internet interconnection market:

- Transit operators, such as Cogent, Tata Telecom or France Télécom (via its Open Transit brand), which interconnect ISPs with each other and with content providers via their international networks. 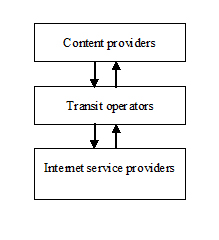 Operators interconnect with each other using either the "peering" or the "transit" method (with larger operators making use of both solutions).

In the most common cases, ISPs and websites purchase transit services from one or more transit operators in order to connect to the Internet and deliver traffic flows to internet users.

Internet operators are also able to connect with each other without a transit operator, via "peering" agreements whereby each "peer" operator exchanges data flows free of charge - in a balanced exchange - with another peer to provide access to its customers.

Peering-based data exchanges, although generally free of charge, are sometimes charged for, hence the term "paid peering", if the traffic exchanged between transit operators is asymmetric.

The peering policy operated by France Télécom (and indeed most transit operators) specifies a maximum traffic ratio (i.e. the ratio between the traffic volumes entering the Orange network and the outgoing traffic volumes sent to the transit operator’s network), above which a fee may be charged. The purpose of this policy is to prevent congestion of the Orange network. France Télécom states in its peering policy that it would charge for opening additional capacity if the incoming traffic entering its network exceeded the outgoing traffic by a factor of more than 2.5. This ratio was specified in the agreement between Cogent and France Télécom concluded in 2005.

At that time, the MegaUpload website – since then shut down by US legal authorities – was a Cogent customer that used to send Orange subscribers, via Cogent, very significant traffic volumes (up to 13 times greater than in the other direction), essentially video content downloaded by web users. In view of the severely dissymmetric traffic to its detriment, exceeding the maximum ratio stated in its peering policy, France Télécom wished to charge for opening additional interconnection capacity.

The Autorité de la concurrence considers that such a practice was not liable to contravene competition law inasmuch as France Télécom did not refuse access to its subscribers by Cogent – and indeed opened additional capacity free of charge on several occasions between 2005 and 2011, in response to demand from Cogent – but simply requested payment for opening new capacity, in accordance with its peering policy, without seeking to charge for existing capacity hitherto provided free of charge.

While examining the case, however, it emerged that, within the context of the lack of formalised internal billing between Orange and Open Transit for access to Orange subscribers, the existence of a margin squeeze situation cannot be excluded, in which Cogent would not have sufficient economic room to propose a competitive offering to content providers, as a result, in particular, of the wholesale price charged by France Télécom for routing content to its Orange subscribers.

In the course of the investigation, only one interconnection agreement between France Télécom and a content provider was identified as being conducive to a margin squeeze. However, this situation appears to result essentially from the strong negotiating power of the website involved, which is very popular, and not to result from France Télécom’s deliberate attempt. More generally, however, it did highlight the opacity of the relationship between Orange and Open Transit.

Because internal exchanges within the France Télécom group by and between these two entities are not formalised, margin squeezing or even discriminatory practices would be hard to monitor, and as such, easier to carry out.

France Télécom has agreed to formalise the relationship between Orange and Open Transit. The aim of these commitments is to prevent margin squeezing and, where applicable, enable the Autorité de la concurrence to detect any such practices.

In response to the concerns raised by the Autorité de la concurrence, France Télécom offered to:

- define a formal internal protocol between Orange and Open Transit specifying the technical, operational and financial conditions governing the provision of connectivity services in France;

- implement a system to monitor application of the aforementioned internal protocol.

On 3 April 2012, the Autorité de la concurrence published these proposed commitments on its website and launched a market test1 to collect feedback from stakeholders operating in the sector.

Following this market test, and after making a few adjustments at the Board hearing, the Autorité de la concurrence deemed the aforementioned commitments to be appropriate, credible and verifiable, and made them binding. They will enable the Autorité, in the event that a complaint is submitted to it, to verify that France Télécom has not engaged in margin squeezing or discriminatory practices detrimental to competing operators.

The internal protocol is to be submitted to the Autorité de la concurrence within three months. The Autorité will monitor implementation of the protocol for a period of two years.

> Full text of Decision 12-D-18 of 20 September 2012 relating to practices concerning reciprocal interconnection services in the area of internet connectivity.