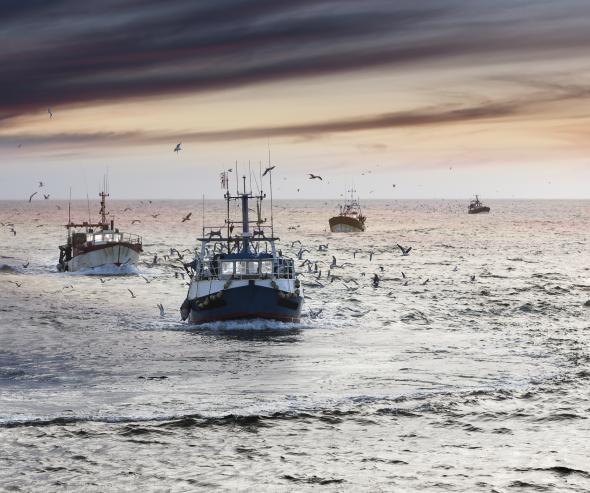 Why volume regulation is necessary

Fish stocks are a limited natural resource shared by the entire fishing industry. While all producers are given completely free access to the resource, each fisherman or trawler has an incentive to fish as much as possible and as quickly as possible, thereby appropriating the greatest quantity of the resource while fish stocks last: this is the root of the "race-to-fish" phenomenon. In the medium term, however, it is in the collective interests of fishing companies to manage fish stocks as rationally as possible, in order to ensure that stock renewal can be maintained.

In regulatory terms, the goal is to enable market players to effectively develop their economic activity and remain profitable even in a context that requires their access to resources to be limited.

The European Union sets quotas for the most widely-fished species in European waters, in order to ensure adequate management of fish stocks. These quotas set out catch limits for fishing of a particular species within a given maritime zone1 and time period.

The initial distribution of quotas between producers and POs is mainly based on the criteria of "fixed right of priority", which is determined based on the amount of fish caught by a given vessel over the 2001-2003 reference period. POs may then distribute sub-quotas between fishing vessels using the criteria of their choice. In the case of "overstretched" species (for which the sub-quota sets a limit that is lower than the level of demand from fishermen), OPs also tend to rely on a system of fixed right of priority in order to distribute individual catch limits among their members.

Inefficiency in the French system

The use of fixed priority systems to determine fishing vessels’ access to resources leads to two main issues:

- firstly, it creates an automatic state of inequality between POs, as well as an aspect of “intergenerational” inequality within individual POs (between those producers who were operating high-capacity catching vessels between 2001 and 2003, and those having entered the market more recently). Such a situation does not work in favour of the most efficient operators or POs;

- secondly, in this system, the fixed priority status of a given vessel brings added value to the latter (implicit, yet real value) as and when the vessel is sold or changes hands. As the fixed priority status is transferable from one crew or owner to another, fishermen naturally prefer to purchase older vessels with favourable priority status, rather than investing in new, less oil-consuming and more environmentally-friendly vessels that are better-suited to the evolution of the fishing industry.

As such, the current system, while free of charge in principle, encourages the creation of a “priority market”, generating income for older vessels and leading to an overall aging of active fleets.

Competition risks identified by the Autorité

The current system for quota allocation also constitutes a risk to competition within the industry:

- firstly, there is a risk of discrimination regarding new entrants to the market, who may have to join a PO in order to gain access to the shared resource. The admission of a new member with little or no priority status effectively means that a PO must spread its quota allocation over a greater number of members, without any consequential increase in the number of quotas being distributed. This risk is further increased by the fact that POs are not obliged to accept new membership requests, nor to provide an explanation for the refusal of an application;

- secondly, the distribution of sub-quotas between members of a PO using fixed priority criteria gives vessels with greater precedence an undue competitive advantage. The criteria used to differentiate fishing vessels is, in fact, based on past activity, and does not account for objective considerations that are economically justified and achievable by every operator based on their individual merit.

The recommendations of the Autorité

In the wake of the quota management reforms of December 2014, the Autorité invitespublic authorities to pursue the reform process in order to create an efficient and coherent management system.

In order to respond to environmental, economic and competitive concerns relating to this issue, the Autorité is in favour of the introduction of individual transferable quotas (ITQs) - which follow the example of the system used to manage the quotas for CO2 emissions - at least in regard to commercial fishing of overstretched species.

This system would see individual operators receive the right to catch a certain quantity of fish within a given timeframe. Producers would therefore be able to adapt their production operations to these objectives, and transfer unused quotas to competitors. The implementation of ITQs would thus lead to the disappearance of the illicit commodification of fixed priority status, and would encourage producers to invest in more modern vessels and equipment.

By removing the influence of fixed priority based on dated information, and relieving POs of their role as gatekeepers in the management of sub-quotas, the introduction of ITQs would also contribute to reducing competition risks, notably the risk of discrimination between operators.

This reform, which has been successfully implemented by a number of other countries, may be accompanied by measures discouraging excessive industrial concentration in order to preserve traditional fishing methods.

Alternative Solution: collective management methods based on objective, transparent and non-discriminatory of quotas

While the principle of free and collective management should be maintained, the Autorité considers that an in-depth review of the current system is necessary, in order to render it capable of functioning in an efficient and non-discriminatory manner. The Autorité proposes the following practical measures:

- a pooling of quotas between POs, encouraging individual POs to merge with one another so that a given section of coastline would be overseen by a single organisation. This would put an end to systemic inequality and encourage a multi-species perspective, which would have the notable effect of improving the industry’s ability to cope with quota reductions;

- a progressive adaptation of the years used as a reference period, substituting 2011-2013 in place of 2001 - 2003 so as to take into account evolutions in the fishing market;

- increased transparency in the conditions by which new entrants are able to gain membership of POs, guaranteeing objective, transparent and non-discriminatory conditions of access;

- finally, a return to genuinely collective principles of resource management by POs themselves, who would progressively desist from attributing individual catch limits based on fixed priority criteria.

The French government could encourage these developments using the national reserve of priority claims, which could be supplemented by the proceeds of vessel transfers and fleet retirement.

> See the full text of Opinion 15-A-19 of 16 December 2015, on the effects on competition of the fishing quota allocation mechanism used in France