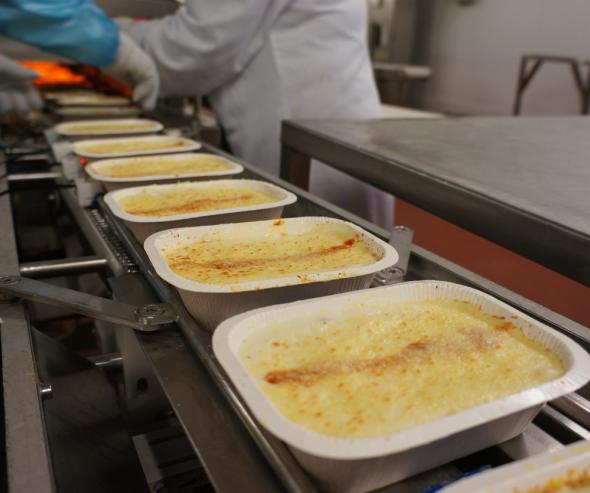 The Autorité enables Cofigeo to become the leader of the canned ready meals sector while still protecting consumers from price increase risks linked to the transaction.

Cofigeo operates primarily in the market for the production and sale of ready meals (in particular under the “Raynal & Roquelaure” and “Zapetti” brands, as well as private labels), cooked vegetables and canned meat products for mass retail distribution. Cofigeo’s parent companies are MBO Partenaires and Société Générale Capital Partenaires.

The assets acquired by Cofigeo relate to the production and sale of ready meals (in particular under the "William Saurin", "Panzani" and "Garbit" brands, as well as private labels).
After completion of the transaction, and in the absence of any remedies, Cofigeo would have had 80% market share in Italian ready meals, over 70% market share in exotic ready meals, and would have concentrated all of the best known brands of the sector.

After completion of the transaction, the new entity would have become the undisputed leader in most of the markets studied, with over 80% of the market share on the IRM market and over 70% on the ERM market. Moreover, Cofigeo would have marketed all of the well-known brands on these markets: William Saurin, Panzani, Garbit, Raynal & Roquelaure and Zapetti. Yet, in these markets and beyond, in the wake of the recent food crises (especially the “horse meat” scandal), manufacturer brands play a reinforced role in consumer choice, which was taken into account by the Autorité.

High market shares are usually associated with a competition decrease. By way of exception, operations leading to high market shares can sometimes be authorised when competition remains effective, notably when new competitors can enter the market or if customers have credible alternatives. The Autorité could thus clear the acquisition of the assets of the cooked meats arm of FTL despite market share in excess of 50% in some markets. However, when the operation presents a risk of a significant reduction in competition and especially if there is a risk of the new entity being able to increase its prices without its current or potential rivals, or customers, being able to resist this, the operation must then be subjected to remedies or be blocked.

In this case, the investigation shows high risks of price increases for products bought daily by French consumers

In its examination of the transaction, the Autorité established that Cofigeo and the targeted companies were the closest rivals on the canned ready meals markets (the second largest purchased the leader): for example, the mass retail distribution sector employed competitive bidding between them to obtain the best prices, either for national brands or retailers’ brands.

Moreover, the Autorité noted that, on the IRM and ERM markets, the production capacities at competitors’disposal were weak. It also noted that it was unlikely that new operators or foreign operators would enter the French market in the short term.

Thus, the mass retail distribution sector would have had no more credible alternative suppliers in the IRM and ERM markets, while the market tests (survey of the sector operators) conducted by the Autorité revealed that the products marketed by the new entity are an essential component of its product ranges.

In light of its analysis, the Autorité concluded that if the transaction were not accompanied by remedies, it would lead to significant risks of sharp price increases in the IRM and ERM markets, which ultimately would be to the detriment of the consumer.

To outweight these negative operation effects, the Autorité attached conditions to its decision to be met by Cofigeo, whose goals are to enable the development of an alternative in the Italian and exotic markets.

As Cofigeo did not propose any commitments allaying the competition concerns identified, the Autorité made use of its power of injunction to clear the transaction. This is the second time this power has been used since 2009 (date on which the Autorité was granted merger control powers2), which allows it, under exceptional circumstances, to clear a transaction subject to remedies, rather than block it.

The Autorité therefore ordered Cofigeo to sell the brand Zapetti, which is used in the IRM and ERM markets, as well as a production site allowing for its operation and the production of private label products in these same markets. These injunctions will enable a rival operator to swiftly supply a credible alternative to the products of the new entity and thereby prevent significant price increases as a result of the transaction. An independent agent will ensure compliance with these injunctions.

By ordering such injunctions, which are proportionate to the risks identified, the decision of the Autorité serves to protect the economic value of the transaction by clearing Cofigeo to become the leader in most of the canned ready meals markets while maintaining a satisfactory competitive structure in the IRM and ERM markets.
The Autorité’s decision is therefore balanced; it enables Cofigeo to significantly reinforce its position by becoming the leader in the FRM, and acquiring strong positions in the ERM and IRM markets, thanks to brands like William Saurin, Panzani and Garbit. The Autorité pronounces proportionate remedies in view of preventing the creation of a quasi-monopoly in the Italian and exotic markets.
While in the French ready meals sector, Cofigeo also significantly reinforces its position as it will own the leading brands (with Raynal et Roquelaure and William Saurin), third-party operators exist in the market and their presence will allow for competition risks to be limited and to offer an alternative to the new entity for consumers.

Isabelle de Silva stated: “Budget canned ready meals are consumed by all segments of the French population, particularly the lowest income households. This transaction contained a price increase risk as a result of the disappearance of the current competition in the markets for meals prepared with Italian or exotic recipes. The Autorité was of the opinion that it was essential for French people to be able to continue to benefit from a broad range of canned ready meals at affordable prices, which the transaction would not have allowed for in its proposed form. ”

2  The previous use of injunctions relates to the re-examination of the acquisition of TPS and CanalSatellite by Vivendi Universal and Canal Plus : http://www.autoritedelaconcurrence.fr/user/standard.php?lang=fr&id_rub=417&id_article=1930